For many years by now the cucumbers at Van Gog Kwekerijen have been growing under SON-T lightings. Recently 5 ha of the Dutch greenhouse was enriched with additional LED-lights, making it one of the first commercial, large-scale cucumber crops with a hybrid installation.

It is the result of a collaboration that was set up earlier this year between the grower and various installers. Despite corona, they were still able to deliver it on time. "I'm expecting the first cucumbers on 26 November," says Edwin Verhees, location manager for the greenhouse in Helmond. 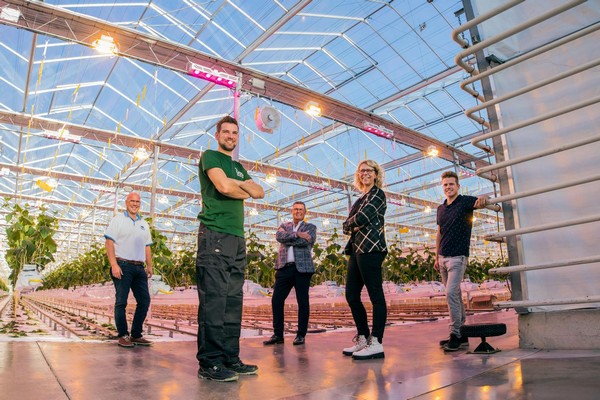 Van Gog Kwekerijen
Van Gog Kwekerijen grows cucumbers in a greenhouse area of 26 hectares in the south of the Netherlands, in Asten and Helmond. 17.5 ha. is illuminated. ‘Van Gog Kwekerijen’ has been proud for years of the high-quality cultivated cucumbers. They would like to offer these year-round to both existing and new customers. In order to be able to meet this demand, the idea of realizing a LED/hybrid greenhouse of 5 ha. was put forward from off the work floor.

The choice fell on the 5-hectare greenhouse in Helmond and the idea excited the management to such an extent that in January/February Edwin held the first exploratory talks with various parties to come to fruition. "In the end, I relied on the good results at the experimental garden in Belgium with hybrid lighting in cucumber. We did not test in our own greenhouses," Edwin reveals.

The management was very enthusiastic about this idea and therefore permission was given to the location manager Mr. Edwin Verhees to enter into the first exploratory talks with various parties in January/February 2020.

The challenge was to realize a successful project with both existing and new partners within a limited time. As if this wasn't challenging enough, the parties also had to deal with all kinds of obstacles and restrictions surrounding the COVID-19 virus during this period. Partly thanks to the right focus, the short lines of communication and the optimal cooperation between the parties, it was possible to plant the cucumber plants on 2 November 2020. "Late for a winter crop, but this year it could not be otherwise. We want to plant earlier in the coming years".

New installation
The new lighting installation is a combination of 50% LED lamps from Mechatronix, type 900 Watt Cool-Stack Boost in combination with 50% 1000 Watt Agrolux SON-T lamps. The regular house installer Cogas Climate Control supervised the project from building up the CHP panel to the control cabinets in the greenhouse and supplied the SON-T lamps. Because of a good planning most of the work could be done during the previous summer cultivation of the cucumbers. The cabling in the greenhouse was mounted by the employees of Van Gog Nurseries themselves under the supervision of Cogas Climate Control.

"Several parties are often involved in the realization of projects. These parties have a strong interdependency: if one party does not do its work properly or according to schedule, others suffer and the desired end result is jeopardized," they agree upon. "Collaboration is the key word in the chain of client, designer, builder/installer and supplier. For all parties, the satisfaction of the client and the end user(s) is the most important goal. When that goal is achieved, satisfaction and pride are the beautiful end result," they say and of course pointing on this recent realization as a successful example of optimal cooperation. 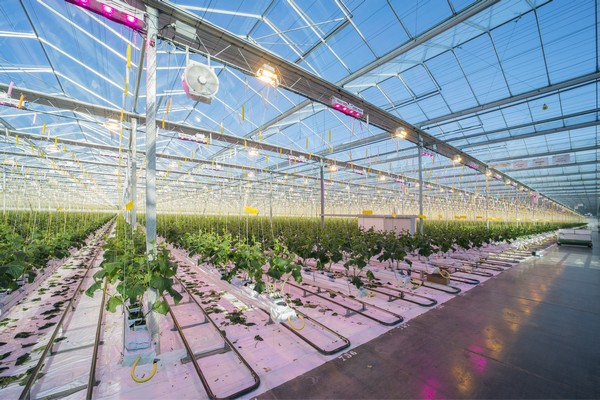 New screen installation
In addition to the new LED/hybrid lighting  installation, Luiten Greenhouses B.V. supplied and supervised a completely new (light reduction) screen installation, equipped with Ridder Climate Screens cloths. The light reduction screen runs on the same wire bed as the existing energy screen. In addition, all facades are equipped with blackout roll screens that prevent the light from being emitted to the outside. "The perfect combination of trained employees of Luiten Greenhouses and Van Gog's own technical team has led to a good end result," they say.

"Again, the key to success was the use of short lines of communication. We opted for simplicity in the system so that on 5 hectares the entire installation can be opened and closed in one go. Simplicity means less stress and malfunctions."

What could be better than a project that runs smoothly? "Everything went on time, the lines of communication were clear, the drawings and deliveries were on time, complete and well-coordinated. In close consultation decisions could be made quickly and considered. It may seem like a dream scenario but, together with our partners, we were able to make it come true."