Micro and nanoplastics not absorbed by plant cells, but do attach to the root cap

Like a toxic Trojan horse, microplastics can act as hot pockets of contaminant transport. But, can microplastics get into plant cells? Recent research shows that they can't.

Over the last decade, scientists have been scrambling to understand the impacts of microplastics. With the breakdown of plastic bottles, washing the world’s seven billion fleece jackets, or the microbeads in face cleansers, microplastics are piling up. How they affect living things like plants is still unclear.

In soil, plastics have the potential to cause problems at the chemical level. Like a magnetic attraction, contaminants can bind to plastics, resulting in toxic accumulation. Contaminants can also hitch a free ride on plastics and potentially make their way into plants. But first, researchers need to know if microplastics—or their even smaller offspring called nanoplastics—can get into plant cells in the first place.

Here’s some good news: they don’t, according to a recent study from Pacific Northwest National Laboratory (PNNL) and Washington State University (WSU). However, microplastics do accumulate on the tips of roots, which could bode well for future cleanup of contaminated environments, but not well for root crops, like carrots. 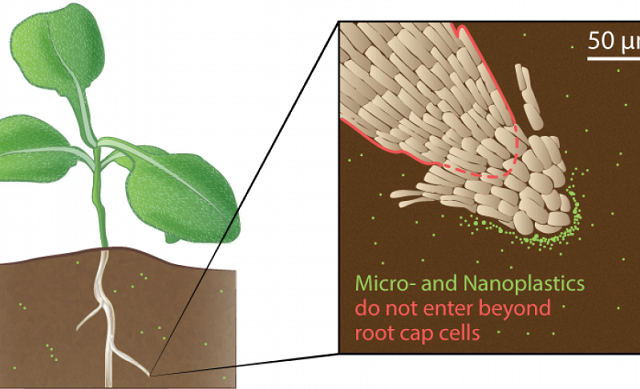 Micro- and nanoplastics were not absorbed by plant cells but did accumulate on the tips of roots, which could bode well for future clean-ups of contaminated environments but not for root crops. (Graphic by Rose Perry | Pacific Northwest National Laboratory)

"To understand issues with nano and microplastics in plants, we have to really understand what’s happening at the chemical and cellular level,” said study co-author Carolyn Pearce, a geochemist at PNNL with a joint appointment in WSU’s Department of Crop and Soil Sciences.

Like a toxic Trojan horse, microplastics can act as hot pockets of contaminant transport. They bind with and accumulate soil contaminants, such as long-lived polychlorinated biphenyls (PCBs). PCBs have been linked to cancer—production was banned in 1970, but they still linger in the environment. The result? A potential free ride into organisms and, perhaps, up the food chain.

The first step to testing the toxic Trojan horse theory is to see if microplastics can even enter plant cells in the first place. “We looked at where they might accumulate on plants, what materials attach, and how they concentrate,” said Pearce.

Size matters when it comes to microplastics in plants
Not all microplastics are created equally. They can be as large as a pencil eraser or as small as a bacteria. Nanoplastics are tiny and are 100 times smaller than a plant cell. At that size, it’s easy to imagine how plants could absorb plastic particles, but there are size limits regarding what passes through cell walls.

Generally, healthy adult plants only absorb materials 3–4 nanometers in size, which is even smaller than a virus. Some studies have shown that plants can absorb nanoparticles that are 10–12 times larger than that, up to 40–50 nanometers. While small particles pass through, the big question is—do plastics?

Read the results of the research at PNNL.gov.