While red light is widely considered the visible spectral region with higher effects on the photosynthesis, the amount of blue required for different species is an ongoing question. Italian researchers dove into the matter and trialed three spectra to see what the effects would be on the crop and what the potential is for growing vegetables at your house.

Light-spectrum manipulation
The research deepen the enhancement of the nutraceutical components in indoor primary production through only the light-spectrum manipulation. To achieve the experimental results was built, in collaboration with the Department of Agronomical Sciences (University of Bologna), an integrated and automated indoor prototypal growing system. In the prototype different state-of-the-art LED lighting lamps prepared ad hoc by C-LED (www.c-led.it) are compared in order to pinpoint the best spectral characteristics for food production as well as the most energy-efficient solution.

Material and methods: Sampling Location, hydroponic system and plant material
Indoor growing system was divided into three sectors separated by a non-reflective opaque membrane. Each sector held two draining trays with 8 pots each containing a 50:50 perlite-vermiculite growing medium. The automated irrigation system dispensed 30” of irrigation each three hours from 6:00 to 22:00 (local time) and again at 2 am. A 200 liters tank, refilled weekly, was used as the water reservoir. To the irrigation water were added a series of nutrients. Room temperature was regulated at 18 ± 2 °C between 8 am and 20 pm, and at 16 ± 2°C between 20 pm and 8 am, by the building HVAC system. Each sector (i.e.: each of the three columns with three shelves each) had a specific light spectrum supplied by different LED lamps. Each shelf (i.e.: each row of the scaffolding) contained one of the three varieties of lettuce (Lactuca sativa L.): var. Maravilla de Verano, var. Lollo Rosso, and var. Crispa. In this way, each variety was illuminated by the three different spectra, therefore generating nine combinations between variety and lightning.

Agronomical and morphological determination
Determinations on the number of leaves, LAI and growth rate were conducted weekly for the entire duration of the plants’ growth since the transplanting (Zink and Yamaguchi, 1962). Plants’ biomass in fresh weight (FW) and dry weight (DW) production were analyzed at harvesting time. Values of electroconductivity (EC) and pH of water tank and drainage was checked three times per week with a conductometer model Basic 30 (Crison instrument, Barcelona, Spain). The content of nitrogen in the leaf tissues was measured weekly utilizing a Yara N-Tester (Oslo, Norway), taking thirty measurement per plant. Vegetables’ yield was related to the lamps’ energetic consumption in order to evaluate the energy use efficiency (EUE) and expressed as g kW-1. 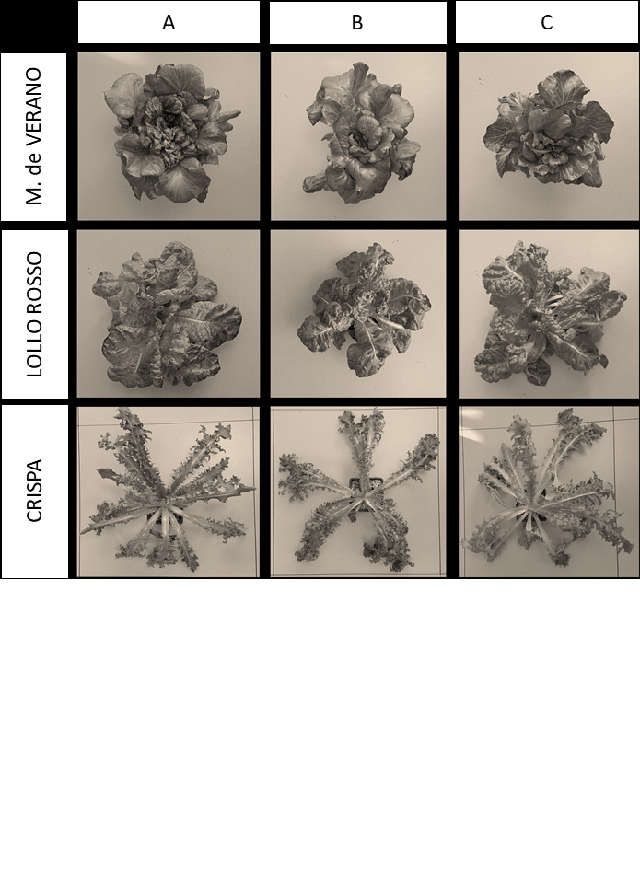 Biochemical determination
At harvesting time, 30 days after transplanting, portion of leaf tissues of different theses were collected and stored in polyethylene bags at -20°C until processed. Extraction and quantification of total phenolic and flavonoid contents was conducted as described in Piovene et al. (2014). Antioxidant capacity was determined with the 1,1-diphenyl-2-picrylhydrazyl (DPPH) method as described by Floegel et al. (2011), in order to evaluate the additive and synergistic effects of all antioxidants rather than the effects of single compounds (Brighenti et al., 2005; Puchau et al., 2009).

In all lettuce varieties, leaves’ fresh weight was significantly increased by light treatments. Thesis A (110±34g) and C (112±42g) determined a better production in respect to B (90±34g) as showed in figure. Between three lettuce varieties, at 30 days after transplanting (DAT), Meravilla de Verano showed highest fresh biomass production with 135±28 grams per plants while Crispa and Lollo Rosso varieties had a production of 104±31g and 72±25g respectively. Dry:Fresh biomass ratio (DFr) revealed a opposite trend respect to total fresh food production: treatment B showed higher DFr with values of 1.34±0.15. These values were significantly different in respect to A (1.25±0.12 ) and C (1.10±0.98).

In this project, all three light spectra integrate a low percentage (8-19%) of green light. These wavelengths were added to continue the work of Piovene (2015) that identified a specific combination of BRr and green for stimulation of biomass production and nutraceutical characteristics. Other works in literature in mentioned green wavelengths for positive effects towards functional compounds content (Samuolienė et al., 2012) and physiological response to photosynthetic light (Kim et al., 2005; Johkan et al., 2012).

How light spectra influenced food production
This study did not identify correlation between percentage of green light and biomass production or nutraceutical characteristics (statistical data not shown) contrary to what stated by the work of Kim et al. (2005) who found positive influence in biomass production with the addition of 24% of green light. Anyway, green light, especially if added to only red and blue LED, completes the visible spectrum and hence helped in the aesthetic presentation of the plants which appeared less purplish-gray and more natural. Therefore, the latter effect of green light within a growing spectrum, would help in better fitting the plant in the indoor living environment for human purposes and ease the identification of disease onset (Massa et al., 2008).

Figure: Study of LED C-LED lamps in collaboration with an italian university. Range of PAR, UV and Far-red are deeply analizyed in product prototyping process.

The food production shown significant differences between lettuce varieties and light spectra. Taking in consideration only the lettuce varieties, Meravilla de Verano showed the best yield in respect to Crispa and Lollo Rosso. Light spectra, on the other hand, confirmed that the optimal ratio between red and blue has great relevance in influencing crop yield. While a certain quantity of blue light is necessary for a proper physiological balance (Yoro et al., 2001), this study showed that lower BRr has a positive influence on food productivity across lettuce varieties in accordance with previous researches (Wang et al., 2016). In general, it seems that the optimal BRr is somewhat species-specific since, for example, leafy aromatic vegetables showed a better biomass production with higher percentage of blue wavelengths (Piovene et al., 2015; Abiusi et al., 2013). On the other hand, strawberry showed an improvement of vegetative growth when the red percentage was higher than blue, although compensated by a background white light (Samuoliené et al., 2010)

In fact, many researches points out how plants require a complex spectrum that may include green: this parameter increase the difficulty to choose the “correct” light recipe, considering a number of factors such as specific species-varieties- phonological stage requirements (Wang et al., 2016; Kim et al., 2005).

Fresh food possesses significant amounts of antioxidant and, due to its regular consumption, highly contributes in providing dietary antiradical protection (Deng et al., 2013; Harasym and Oledzki, 2014). Generally, fresh fruits have higher level of total polyphenols, total flavonoids and antioxidant capacity than vegetables (Chun et al., 2005) but, due to the higher consumption of vegetable the antioxidant uptake may be much lower. In epidemiologic studies (Chun et al., 2005) the daily nutraceutical uptake may be estimated at 129mg for TPC and 17mg for TFC.

The indoor experimental structure tested in this study guaranteed a certain TPC and TFC production. Considering the average consumption of 0.27 Kg d-1 person-1 (Leclercq et al., 2009; USP-BO 2013) is possible assert that indoor soilless system lighted with all LED spectrum allowed an average uptake of 6% of TPC and 6.2% of TFC. 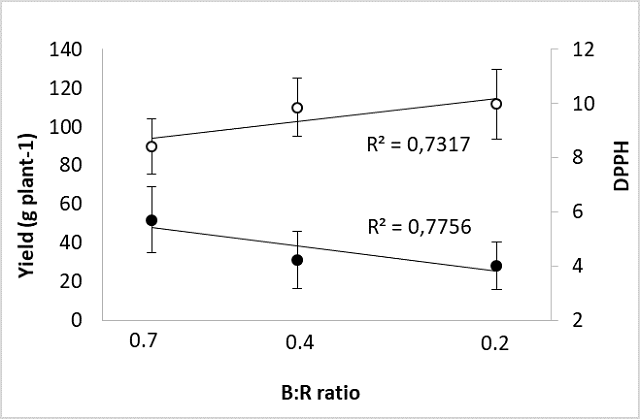 Read more on the indoor food production sustainability and the conclusion of the research here.