Hydroponic growing is known to be clean and sustainable, this also applies to the foam substrates of Growfoam. Currently Growfoam is investing heavily into the development of an optimal cultivation strategy, with the goal of making it easier for growers to transition to this new, clean cultivation media in the future. 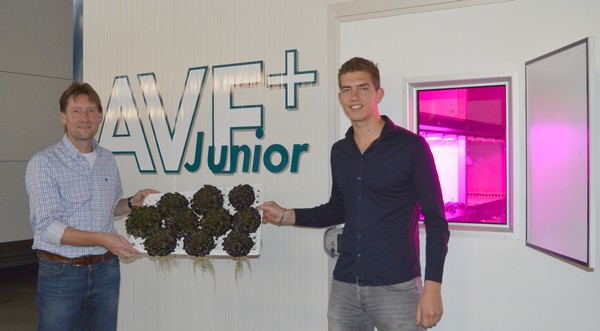 Niels Steenvoorden of Growfoam and Rick van Schie of Artechno near the AFV+ Junior in which the cultivation research was done.

Niels Steenvoorden: "Our goal is to be able to give the growers a cultivation recipe when supplying our foam substrates." Since this spring, Niels is CCO of the producer of the relatively unknown growing media which is already being used by several growers for production and testing.

"With the call for increasingly sustainable products we are convinced that our 100% biodegradable, clean and carbon neutrally produced foam will be used by many growers, but only if they can get equal growing results vs current substrates. For this reason we did this research conducted in one of our focus segments - vertical farming - by another pioneer in the market. It is good to have our own internal tests confirmed by them and to gain new insights."

Optimisation
The research Niels is referring to is about cultivation in an AVF+ Junior climate cell with 5 growing media, including 3 variants of Growfoam. The research has been conducted by Rick van Schie, the lead agronomist at Artechno. Artechno is a Dutch company that builds and designs complete water management, harvesting and cultivation systems for greenhouses and vertical farms. The idea is that by conducting a lot of (cultivation) research themselves, whether or not at the behest of clients, they will be able to further optimise the knowledge and application of all variables in vertical farming.

The latter is also Growfoam's objective with their growing media, including two plugs (an updated and old variant) and Growfoam Soil ('shredded' foam substrate). These three cultivation media were tested by Rick on one cultivation position inside the AVF Junior research cell. During the test the various substrates were tested and measured to determine the the germination rate and plant weight (harvestable weight). During the research phase the irrigation strategy was setup to optimally use the characteristics of the Growfoam plug. 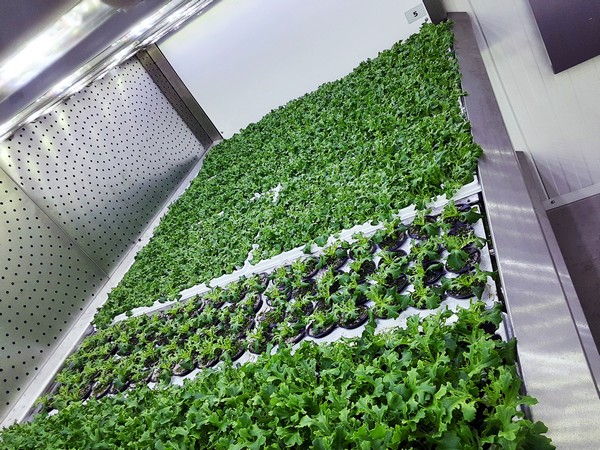 Test set up
On August 24, the research was started and on October 9, after a cultivation of six weeks, Rick was able to share the results with Niels. What was remarkable is that the Growfoam substrates do not perform any less than the usual glue and rockwool plugs in the market, when it comes to germination in phase 1 of the test.

Water level
During the research, Rick was in close communication with Growfoam, constantly sending updates to Niels, complete with pictures and videos, using two time-lapse cameras in the cell. “The first growth differences really become apparent after seven days. Educational, according to Rick: "At the moment growth differences started to appear between the different substrates, I returned to the initial irrigation strategy used at the very start of the cultivation.

Because the foam substrates have a lower water retaining capability than the usual cultivation media in the market, the plugs were constantly 2 millimeter under water. After replanting, I have lowered the water level until 2 millimeters below the plug, but I suspect the optimal cultivation has not been achieved yet." Niels adds: "For an optimal functioning of Growfoam, continuous contact with water gives the best results." 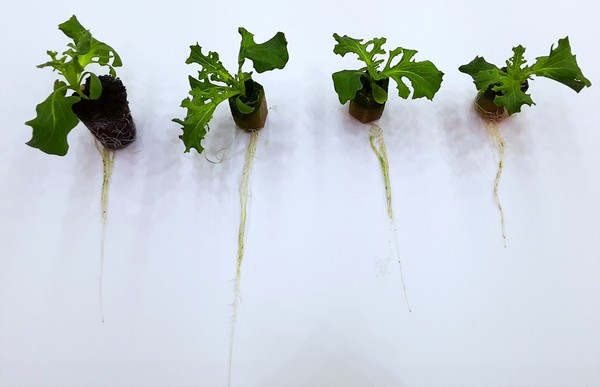 F.l.t.r.: The roots of the lettuce plant in a glue plug, the two different plugs of Growfoam and a rockwool plug.

Roots
The roots under the five cultivation media at the end of the test were healthy in all cases. "This means that the water-oxygen levels were correct. You do see differences in root formation."

The differences were also observed by Niels: "The roots under our plugs in this test are longer than with the other cultivation media and quickly make contact with the water. You can see that the roots can easily break through the foam, although it would be good if there was some more horizontal growth. We have anticipated on this by applying extra incisions in the newest plug and Growfoam soil has also been based on a freer growth of the roots." 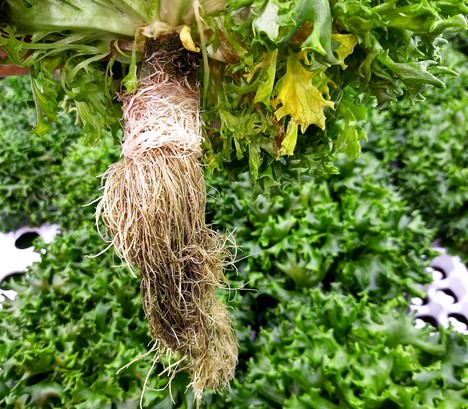 The roots under the Growfoam-plug

Learning for two reasons
With the test results, Growfoam can continue the development of their products, which is very promising for other hydroponic cultivations and vertical farming crops besides lettuce, according to Niels. "Think of leaf lettuce, rocket and herbs. Based on the experiences gained in the cooperation with Artechno, I see good reasons for a continuation of our joint test for new product forms and/or crops."

Rick can only affirm this. "There is much to learn, also in the ornamental growth, where growers have discovered vertical farming for propagation. We like to help by making the AVF Junior research cell available for interested companies and by sharing knowledge. Because ultimately, we believe that everyone benefits from sharing, both on the executive side with the grower, as from a financial aspect - which means a better bottom line in a good business case."