Virginia Artero, of Nationwide Produce: "Prices are high due to the gap left by the Netherlands and Poland"

Almeria's tomato campaign has started more than a month earlier than usual. Growers are seeking to produce earlier and earlier in order to avoid the stiff competition from Morocco and Turkey. For the time being, tomato prices in Almeria are higher compared to those at the start of the previous season due to the unexpected gap in the Dutch supply, as the summer campaign there is already coming to a close. 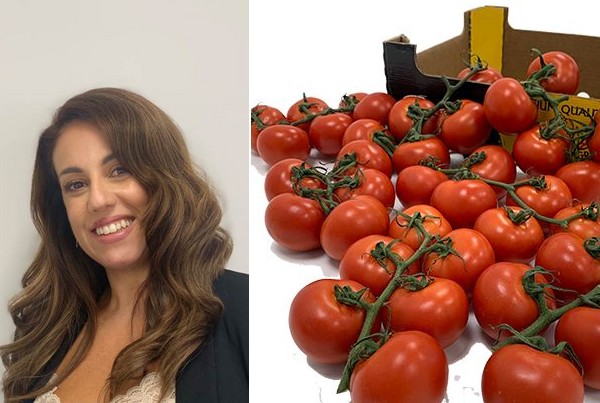 "In Almería, we usually harvest the vine tomatoes at the end of October or even the second week of November," says Virginia Artero, sales manager at Nationwide Produce Spain. “We have been marketing high quality vine tomatoes for more than ten days thanks to the fact that, although it is hot, the temperatures are mild at night. The large European distribution chains didn't expect Almería to arrive so soon, so they are rearranging things in order to start loading tomatoes here.”

The main reason for these early harvests, according to Virginia Artero, is that “many producers are seeking a commercial window before the arrival of large volumes of Moroccan and Turkish tomatoes. We have to fight in some way against the competition from Morocco, and kicking off earlier with the harvest contributes to this, since this way supermarkets choose to start their programmes with us. It is worth recalling that last season was a very difficult one in terms of prices due to competition from third countries, increased costs and the greater impact of pests.

According to the exporter, although those who have vine tomatoes are currently selling them under programs or to the domestic market, "at the moment they are also doing very well in the spot market, since there is a production gap that nobody expected. The Netherlands is finishing earlier than usual due to the hot summer it has had. Something similar has also happened in Poland, where the high temperatures caused the harvests to start early in the summer, and now there is hardly any product left and the quality is not up to the desired standard. That is why loose tomatoes are being sold in the European markets for around 6 Euro per box, while last year only 3 Euro per box were paid on the same dates. However, I don't think prices will stay that high for long, as a lot more tomatoes have been planted early in Almeria this year.”

Besides its subsidiaries in the Netherlands, the English company Nationwide Produce also has a Spanish office in Almería, where tomatoes are one of the main products. The company also produces potatoes, onions and carrots in the UK, and is devoted to the import and export of fruits such as citrus and exotics. 85% of Almeria's tomatoes are intended for the United Kingdom and, to a lesser extent, the Netherlands and Scandinavian countries. The company distributes the products under its own brand, while also promoting the brands of its suppliers.

The tomato acreage is being reduced again in the province of the "plastic sea", especially in Níjar, where tomatoes have been traditionally planted due to the salinity of the soil, and where other vegetables, such as cucumbers, bell peppers, zucchini or eggplant, continue expanding. The high production costs, the low profitability resulting from the increasing difficulty in fighting pests, such as the Tuta absoluta, and the growing threat of the brown rugose virus, are causing tomato growers to lose interest in the crop. To this we must add the very competitive prices in Morocco and other third countries.

“Many European countries, especially the United Kingdom, are working more and more with Morocco, which produces good tomatoes, but where there are no controls on seeds, the use of phytosanitary products or the MRLs to the same extent as in Spain. Tomatoes from third countries are growing in popularity among European importers. It is true that we have lost some ground with our tomatoes, but we remain as leaders in the production and marketing of vegetables,” says Virginia Artero.