Why seven layers are better than three or five

A 7-layer film is one where seven extruders are simultaneously extruding polymers to form 7 concentric rings of molten polymers that solidify to form one film. If the film cross section is seen under microscope, seven separate layers can be observed. 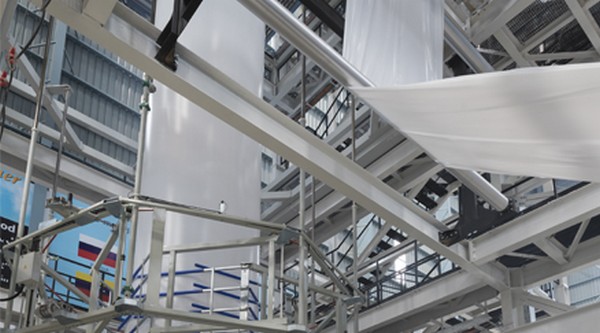 Film’s quality depends significantly on the quality of the machine itself. Bandera is a worldwide leader in extrusion lines since 1947, and their 7 layer blown film machines are among their latest high technology machines. Greenpro's Bandera machine is Asia’s first 7-layer wide width blown film plant and is one of the few in the world. It is equipped with multiple technological features to ensure consistency and uniformity viz. automatic thickness control from K-Design; 32 component dosing system from Doteco; and width control technology with internal and external bubble cooling systems.

The 7-layer Bandera machine allows them to separately extrude pure resins in each layer that translates into better performance, unlike the mixing of many resins in a single layer as is the case in a 3-layer or 5-layer film. Additives such as anti drip, UV absorbers, UV stabilizers can be applied on separate layers resulting in minimal interference between the additives, and each additive gives a stronger and longer lasting expression as compared to the same in a 3 or 5 layer.

One of the most beneficial factors of 7-layer film is down gauging, attributed to precision control in layer wise formulation. Generally, the company can down gauge a film’s thickness by upto 15 %, and still achieve same mechanical strength and durability in a 7-layer film as compared to similar 3 or 5-layer film. This enables customers to save cost on application.