Wild tomato species represent a rich gene pool for numerous desirable traits lost during domestication. Among them are e.g. robustness in harsh environment or resistance to various pathogens. An international research team, including scientists from Weizmann Institute of Science and IPK, exploited an introgression population of wild desert-adapted species and a domesticated tomato cultivar to investigate the transfer of wild species-associated fruit traits on the genetic, regulatory and metabolic level. The results which have been published in the magazine 'Nature Genetics' reveal transcriptional and biochemical changes accompanying introduction of 'wild' genes into tomato cultivars. The study presents characterization of key steps in nutrition-associated specialized metabolism and transfer of the tomato fruit resistance against common fungal pathogen Botrytis cinerea. 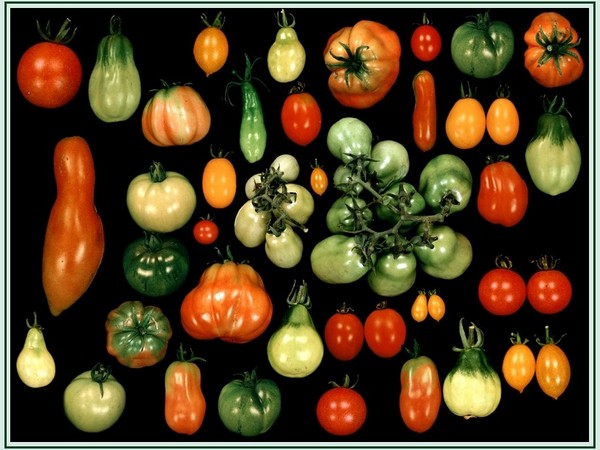 Domestication and subsequent intensive breeding of tomato had a major impact on fruit ripening and the myriad metabolic processes accompanying it. In result, modern tomato cultivars exhibit a range of archetypal fruit characteristics, including e.g. texture, size, aroma, pigmentation and flavor. At the same time, continuous selection through breeding resulted in reduced genetic diversity and recurrent elimination of significant fruit qualities, such as e.g. robustness of plants in drought stress or resistance to various pathogens.

In this study, the scientists utilized advanced genetic resources, together with multimodal molecular and phenotype profiling, to perform an integrative QTL analysis in tomato fruit. The population of interest included 580 introgression lines developed in the lab of Prof. Dani Zamir from the Hebrew University of Jerusalem. Each of these lines carries a small fragment of wild tomato Solanum pennellii in the background of a modern tomato cultivar M82. The team of Prof. Asaph Aharoni from the Weizmann Institute of Science performed a multimodal profiling of fruits from the whole population, including RNA sequencing, mass spectrometry-based metabolomics and pathogen sensitivity assays at different developmental stages. The resulting massive data resource was used in a multi-level QTL analysis and allowed Dr. Jedrzej Jakub Szymanski, head of the research group “Networking and Modelling” at IPK and former researcher in Prof. Aharoni´s lab, to draw causal links between genetic sequence variation, quantitative changes in gene expression and metabolite levels, and changes of complex phenotypic traits.

From hundreds of identified interactions the team picked several interesting candidates. “We focused on the impact of S. pennellii genes on human nutrition-associated secondary (specialized) metabolites and fruit resistance to pathogens, two very contrasting biochemical traits in the wild and domesticated tomato species”, says Dr. Szymanski. The research team identified and characterized an enzymatic step in the predicted pathway wherein α-tomatine, the fundamental anti-nutritional and defense alkaloid present in green tomato fruits, is converted to esculeosides and lycoperosides during fruit ripening. “This chemical shift is probably important for reducing the bitterness provided by α-tomatine and/or countering temporal needs for defensive fruit metabolites”, says Dr. Szymanski. Furthermore, loci and genes associated with the accumulation of health-promoting flavonoids in the fruit skin tissue were delineated. Observed changes in gene expression and metabolism, e.g. accumulation of defense metabolites, also affected complex phenotypes, such as pathogen resistance. “In our study, we observed that increased resistance of fruits to a common fungal pathogen B. cinerea was reflected on multiple levels of cellular complexity - variation in gene sequence, gene expression, accumulation of specific metabolites. Networking these elements reveal mechanisms leading from changes on the molecular level to macroscopic effects relevant for plant survival and its commertial value”, says Dr. Szymanski.

The large dataset generated in the study is a unique resource for the research community. “While we were able to characterize in depth only a few candidate genes and metabolites, the dataset can potentially be mined for tens, if not hundreds, more candidates and could be integrated with the wealth of published phenomics data available for the same introgression lines”, says Dr. Szymanski.

Exploring the trajectory from wild to cultivated fruit is indispensable for a comprehensive understanding of fruit metabolism and the impact of human selection on both positive and negative fruit quality traits. “We anticipate that the genotype-phenotype associations inferred through this study will be a significant contribution to the current molecular breeding efforts to counter the recurrent elimination of key fruit quality traits such as flavor and pathogen resistance.”