A Moleaer Clear nanobubble generator was installed at Prominent Grevelingen in the Netherlands in spring 2020 with the aim of investigating whether this technology is able to reduce harmful algae in the basin water during the summer, and improve the overall water quality. Several interesting improvements have been observed.

Moleaer’s nanobubble generator has two operating principles that improve the water quality of basin water and break down algae. First of all by distributing oxygen well from surface to soil. Second, through oxidation. Due to oxygen enrichment and oxidation in the soil, the organic sediment layer decreases, so that less food is available for algae. The oxidation also causes the breakdown of algae cells. It is important to note that the operation of a nanobubble generator can ensure that the water quality improves structurally and not temporarily as with traditional aeration or chemicals. However, processes that have built up over years do take time to change. This can vary from weeks to months and depends on a number of quality parameters at the start. 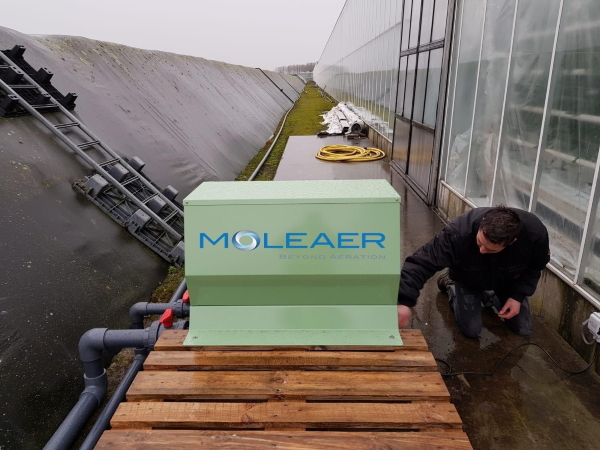 Arnold Groenewegen of Prominent Grevelingen, says: “From April onwards, we were used to dosing agents based on the color of the basin water to inhibit algae growth. I think a lot of growers do the same. This year we didn't actually dose anything and instead we relied on the Moleaer's Clear nanobubble generator. We then looked at various filters in the greenhouse. First of all, the sand filter. We now flush that through two to three times less than before, an important indication that there is less algae in the water. We then looked at the biofilter. That too appears to remain cleaner, and we now also rake much later. Finally, we added 50% less hydrogen peroxide to keep the dripper hoses clean. These are all clear indications that the quality of my basin water has improved. As far as I am concerned, that Moleaer unit will not go away!"

Michiel de Jong from Moleaer adds: “We have taken various measurements of the basin water almost every week. First of all, the oxygen content, which is saturated from the surface to bottom. In addition, a Secchi disk was used to measure the clarity of the water. Those measurements showed that the water became clear to the bottom. Of course, variations remain visible, it remains a natural ecosystem. Extra sunlight, but also a sudden rain shower can have a stimulating effect on algae growth. We also expect that over time this stimulus will have less and less effect on algae growth, because the organic layer on the soil slowly diminishes ”.

Moleaer's Clear nanobubble generator has been developed to introduce nanobubbles from the ambient air into surface water in order to improve the water quality. The nanobubbles move randomly through water like pollen in the air. Nanobubbles remain suspended in water for long periods of time, acting like a battery that delivers oxygen continuously to the entire body of water.

Per unit of water, Moleaer nanobubble generators bring the most nanobubbles into the water. Due to the long residence time of the nanobubbles and the enormous contact surface between the gas bubble and water, the oxygen dissolves very efficiently. Moleaer offers a wide range of nanobubble generators to enrich the water with oxygen at different places in the irrigation system, with the aim to accelerate the adoption of chemical-free solutions to improve water quality.