"HPNow’s HPGen A-Series product line is specifically designed for the needs of horticulture growers. This autonomous system generates Peroxide UltraPure directly on site, using only water and electricity as inputs, with no need for user intervention or any handling of chemicals", Ziv Gottesfeld, CEO of HPNow, explains. "Peroxide UltraPure is a highly effective water treatment agent, which does not require any stabilizers, additives, or other impurities. Peroxide UltraPure breaks down to pure water and oxygen after use. Unlike chlorine, it can be used across a wide pH range, causes no dripper damage, and can be safely recirculated and used in organic produce." 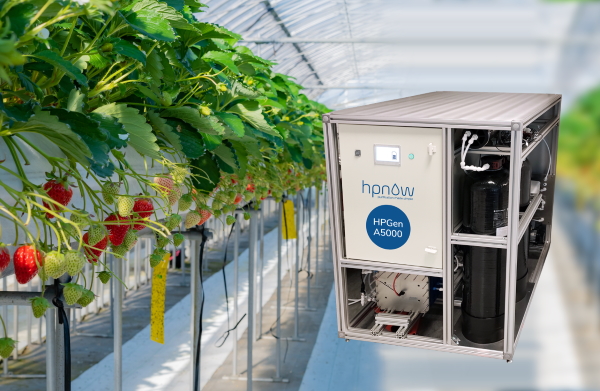 Improved crop yield
HPGen keeps emitters clean of algae and fungi and prevents the buildup of biofilms – keeping irrigation uniform, and ensuring all plants get the same amount of water and nutrients. "This creates optimal conditions for the crop, which result in yield increases and better crop quality. Maintenance and replacement of the irrigation system is reduced", Ziv says.

Increased oxygenation levels, boosts organic matter in the soil
HPGen also improves dissolution of organic fertilizers and provides soil micro-organisms with the oxygen they need to thrive, resulting in increased organic matter available to the plant and improved plant nutrition and vigor.

The HPGen A-Series product line is available in a wide throughput range. It has been tested and proven in commercial greenhouse installation across horticulture crops ranging from watermelon and cucumbers, to berries, tomatoes and peppers; and with both soil and soil-less cultures, as well as hydroponics. Check out some experiences of growers who have used the system here.