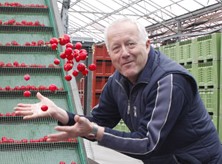 Cows are walking around with a bell around their neck and the yodeling is unrivalled. But for growing organic radish, they could do with some Dutch help on a plateau in the vicinity of Vienna, Austria. Piet Zwinkels, the Westland's former radish grower, arrived just in time. He has been involved in the project as a crop advisor for six months. “I am yodeling from happiness. It is such a beautiful, unique project with additional significant growth possibilities.”

Completely organic
January 20 will be the first organic radish harvest in the young, Skal-certified Austrian greenhouse horticulture company. At the beginning in 2017 they started with tomatoes, peppers and cucumbers. All that at around three hundred meters above sea level, with three times as much light as at the Dutch coast. "It is unprecedented how well the radish grows there and it is completely organic," Piet says enthusiastically. 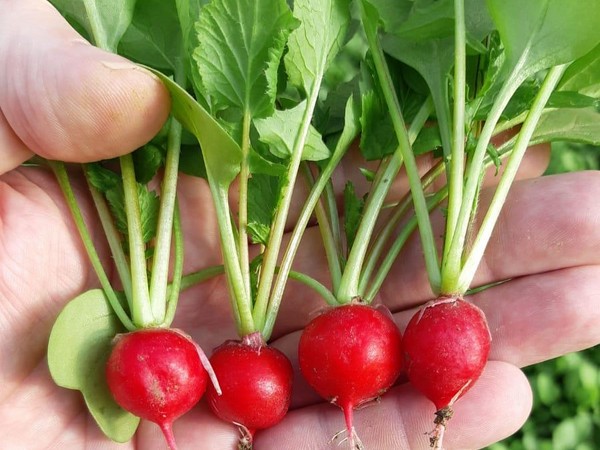 He came in contact with the company through Jan Baremans, a former cherry tomato grower. Jan spent two years at the company as a consultant to set up cultivation of fruit vegetables. Because there also was the ambition to grow leafy crops and the retail sector asked for it, Piet came into the picture. "I started with three hectares and am now trying to convince the grower to consider a combination with lamb's lettuce."

Empty sticky traps
The radish is grown on the Austrian plateau in a sandy loam soil that holds the minimal existing fertilization well. “Everything is completely organic, organic with the use of bio-stimulants, the ingredients of which I knew, but didn't know that it worked so well. I think the Netherlands can still learn a lot in that area.”

At the otherwise completely solitary company, Piet feared that quite a few insects would fly into the greenhouse. After all, the forest is nearby. "I immediately hung up sticky traps, but I only found some house flies and not a single leaf fly or other types of pests that growers prefer to keep out."

Burner
Soil hygiene is often the biggest stumbling block with organic radish cultivation. "You want to prevent steaming," says Piet. “Here in Austria a start was made with virgin soil on which cultivation was started for the first time. The top layer of the soil is kept superficially clean with a burner and that works perfectly.”

Piet believes that organic radish has a great future. "The retailers demanded this and also in Italy you see it moving in that direction with more organic cultivation."

Also in the Netherlands?
A challenge that growers in the Netherlands are, of course, happy to take on. Is a rollout possible in the Netherlands? "Yes," says Piet, "although cultivation in company clusters poses a problem. For example, you will have to keep the window vents in the Westland really closed or have to screen very well to keep all the insects out.

That then also requires a slightly forced way of growing with, for example, air conditioning to keep the humidity and airflow at the appropriate level. However, that will cost a bit more and of course the question always is who will pay for it. Furthermore, switching from conventional to biological is difficult because during switching the company must be vacant for a while. The costs also play a role there. But if that succeeds, as a Dutch grower I would shout it from the rooftops, because then you are unique.”

Outside in summer
In Austria it is somewhat simpler where that is concerned. In June, after two radish crops, cucumber will start to be grown in the three-hectare radish greenhouse. “And then my plan is to grow radishes in the open field, on 15 hectares of land that could possibly be expanded in the future. I think that should also go well, especially now that the results in the greenhouse are so good here.

Six months ago I hadn't thought that I would grow radish again, and certainly not that it would be such a success", Piet concludes. He is already looking forward to his next quick visit to Austria, where he visits the company for two to three days every three to four weeks. When the first radish is harvested, he will be there.