AppHarvest Founder & CEO Jonathan Webb spoke with members of the United Nations Security Council over the weekend about the benefits of controlled-environment agriculture. The practice is key to solving the looming crisis noted in studies that have found the world will need to produce at least 50% more food by 2050.

Kentuckian Kelly Craft, who was appointed the U.S. Ambassador to the United Nations earlier this year, organized the trip to Kentucky, which showcased development in Middle America. Webb described AppHarvest's plans to locate a series of indoor farms across Appalachia to improve Americans' access to fresh fruits and vegetables. The first such facility, which will span 2.76 million square feet, is under construction in Morehead, Ky., and will open in the second half of next year. 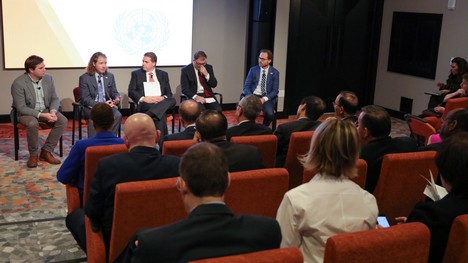 Beyond the panel discussion, the group joined newly elected Gov. Andy Beshear for dinner at the Governor's Mansion on Friday night.