Learning from building a rooftop greenhouse

Inagro and Agrotopia prove that agriculture and industry do not have to be competitors when it comes to land usage. A research greenhouse will soon be built on a crate warehouse from REO Veiling in Roeselare. The project is one of the five pilot projects called ‘Productive Landscape’ done at the Flemish standard.

Inagro packs experiences from the realization of the roof greenhouse in a series of study reports. "The design and construction form a fascinating learning programme," says Mia Demeulemeester, delegated manager of Inagro. "We are happy to share the knowledge we have collected with the sector via a study report."

With Agrotopia, food production on an industrial roof is given a prominent place in the Roeselare skyline. The rooftop greenhouse is therefore a striking example of versatile use of space in an urban environment. ILVO and the Vlaams Bouwmeester Team, with the partners Ruimte Vlaanderen and the Department of Agriculture and Fisheries, selected the project as a Productive Landscape Pilot Project. 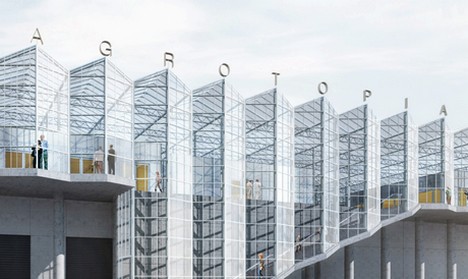 First study report completed
The architectural approach was realized through a design competition. The building of nearly 9,500 m² will house technological research facilities for the production of fruit and leaf vegetables and an educational route for a wider audience.

"The design and construction form a real school," is stated by Inagro. "In order not to lose our collected knowledge, we are launching a series of study reports that can be consulted online."

The first part of the series deals with the phase from the start-up of the project and the design process until the implementation file. It is a source of inspiration for future urban horticulture projects with multiple use of space between different parties. In a second part, Inagro will share its experiences about the construction and operation. 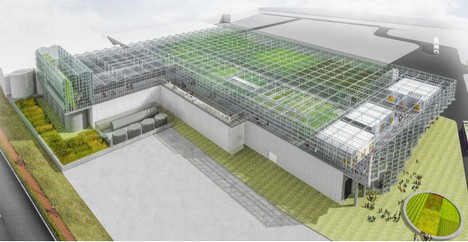 From cultivation technique to stability to legal aspects
"Because of the specific location on the roof of a warehouse and the integration of numerous innovative techniques, the file is complex in terms of construction techniques," says Ine Pertry, Agrotopia project manager at Inagro. "That is precisely why the study report reflects so well the issues that construction teams have to take into account when starting a similar project."

Just consider for example the maximum allowed weight on the underlying warehouse and the roof. That load determines the functionalities and cultivation techniques. "That is why we chose to locate certain materials and devices on the ground floor," Ine Pertry adds. 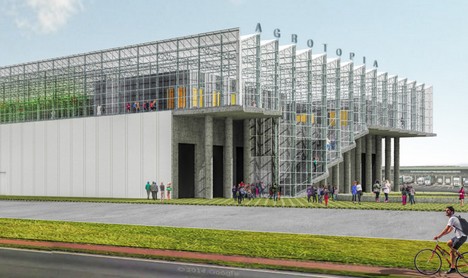 Another aspect is the storage of water for cultivation. "Rainwater is the most suitable type of water for hydroponics, but we continuously must have sufficient rainwater available on a limited surface area."

High cylindrical water silos for water storage have been built on the ground floor next to the crate warehouse. They also form the basis for the high façade greenhouse. "That too is a form of multiple use of space," says Ine Pertry. 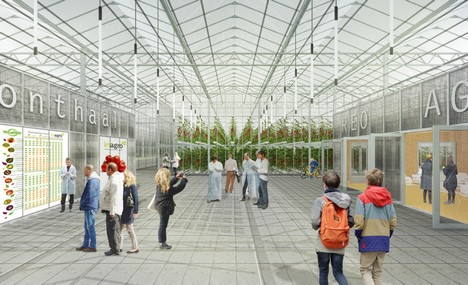 In addition to technical design issues, the study document also discusses the experiences from the preparatory process. "As example, we describe the legal aspects, such as town planning conditions, permits or agreements about the right of surface area," it is mentioned. Based on those experiences, Inagro and the construction team formulate advice for the future.

The design phase study report can be read at Inagro. (Dutch)