"The new standard in substrate measurements"

For many growers, the root zone of the plant is still unexplored territory. This is now a thing of the past: the new CARA MET sensor from Cultilene offers a better, more accurate and more reliable insight into the situation in the root zone. This offers opportunities to optimise the irrigation and fertilisation strategy and to raise production and quality to a higher level. The sensor – which provides real-time insight into the EC, the water content and the temperature in the root zone – is more accurate and cheaper than the sensors that have been used until now. 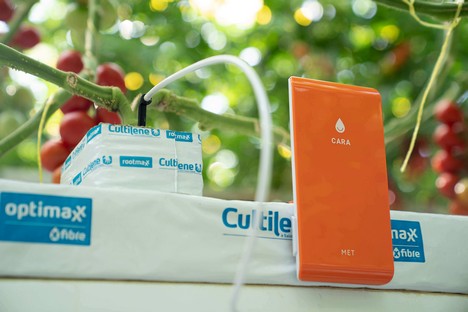 Cultilene is best known as a supplier of horticulture glass and stone wool substrate. But in fact, this substrate is only a ‘tool’ to achieve an optimally controllable cultivation. “With our substrates, we primarily want to offer growers a controllable water buffer, with which they can steer plant growth vegetatively and generatively”, emphasizes Bonny Heeren, General Manager of Cultilene. “After all, good water management in the root zone is an important basis for an optimal plant balance and therefore for a successful cultivation.

For optimal water management it is crucial to have insight into what is happening in the root zone; as a grower you need to know where you stand. According to Heeren, there is still much to be gained in this area. “To measure the EC, water content and temperature in the root zone, growers have so far used WET sensors and scales. But usually a very limited number of measuring points are used on a large cultivation area. This is remarkable; one measuring point is usually not representative of the entire greenhouse. The fact that so few sensors are used is partly due to the price of these sensors. Another disadvantage is that the existing sensors are relatively unreliable in the higher ECs. And this at a time when – due to the rise of flavour tomatoes – more and more is being cultivated at higher EC’s.”

Challenges in development process
In order to give growers more and better insight into what is happening in the root zone of the plant, Cultilene decided two years ago to work on the further development of the WET sensor. “We did this together with former WUR researcher Dr. Max Hilhorst; founding father of the WET sensor. We already had contact with him through various other R&D projects. In addition, SOWNet technologies – a spin-off from TNO – also joined the project. They specialize in sensors and wireless communication. For the design of the sensor we hired industrial design agency NPK Design. We thought it was important that the appearance of the sensor fits in with the high-tech environment of the modern greenhouse.”

The development process had several challenges. The new sensor not only had to be cheaper and reliable when measuring the higher EC values, it also had to be wireless. “From the beginning, our goal was to achieve ten sensors per hectare. This means that the reliability of the measurements is substantially higher than in a situation with only one sensor per hectare. But with such a large number of sensors, it’s a must that a sensor is wireless.”

However, wireless communication in a greenhouse has its challenges, says Heeren. “A greenhouse is a kind of ‘Faraday’s cage’. In addition, the amount of water in the plants and substrate impedes some frequencies in the field of wireless communication. But there was also a trade-off between optimising the battery life and the sensor’s calculation capacity. The goal is for the battery to last at least one growing season.”

Revolution in the root zone
These conditions have all been brought together in the new CARA MET sensor, which Cultilene is now introducing and is sold by SenseNL. “CARA MET is a revolution when it comes to collecting data from the root zone,” says Heeren. “This sensor is very accurate in measuring the EC in a range of 1 to 12. The EC data – together with the data on temperature and water content – are transmitted wireless to the cloud via a base station that is installed in the greenhouse. In the cloud, the raw data is processed using a special algorithm. These data is then forwarded to the LetsGrow.com platform, where growers can view them. Growers who are not customers of LetsGrow.com can access the data at any time and via any device via the water balance module on the website of Cultilene.”

It is also possible to include certain target values in the module; the grower will then receive an alarm when a set limit is reached. “And there is even the possibility to integrate photos of the development of the root environment and of the head of the plant, so that as a grower you get a good insight into the effect of your irrigation and nutrient strategy. You can also look back at the development of the plant at a later time and learn from it. There is also a ‘heat map’ available; a map that provides insight into the variation in EC, water content and temperature in the greenhouse. This is a nice tool to increase the homogeneity in the entire greenhouse. The ultimate goal is to improve the performance of plants that are under performing so that the average yield and quality of the cultivation increases.” 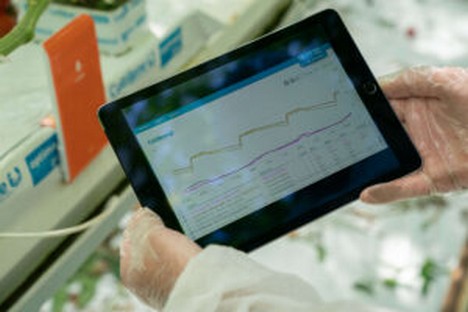 Pricing advantageous
The CARA MET sensor is waterproof, scratch-resistant and easy to use and has a contemporary and remarkable design. CARA MET is sold in sets of ten sensors plus base station. While the regular WET sensor costs more than 2000 euros, the price of the CARA MET sensor is 599 euros per sensor. This brings more intensive measuring within reach in terms of price. And for customers of the Cultilene stone wool slabs a nice discount is available in the first year. The sensors, which can be used worldwide, are now available for presale and will be delivered from Mid of January.”

Precision growing
By moving from one to ten sensors per hectare – and because the CARA MET sensor performs measurements in a larger part of the substrate – growers get more and, above all, more reliable and accurate data about the situation in the root environment. They can adapt their irrigation and nutrition strategy to this, in order to take production and quality to a higher level. “Growers get more insight into the black box that the root zone still is, and therefore more control over the root environment,” underlines Heeren. “And the additional data that will become available on the root environment are very valuable in the artificial intelligence applications that are on the rise within the greenhouse horticulture sector. This data, for example, makes a yield prediction algorithm more accurate.”

Because more data is available, major steps can also be taken in the area of precision growing. In addition, the available information helps growers to be more efficient with water and fertilisers and to improve the Water Use Efficiency (the amount of water used in relation to a kilo of product produced). “This is in line with the United Nations’ Sustainable Development Goals. Reducing water scarcity is one of these goals. The CARA MET sensor contributes to this: growers can use it to irrigate and fertilise in a more targeted way, thus reducing their water consumption. In addition, the greenhouse horticulture sector will have to grow without emissions by 2027; in this context, too, a more conscious use of water and nutrients is crucial. The CARA MET sensor allows growers to control it.”

Cashing in on valuable insights
The application managers of Cultilene support growers in interpreting the sensor data and in the targeted optimisation of the water management in the root zone. “With the new possibilities offered by the CARA MET sensor, Cultilene can even better help growers to get the most out of their substrate and achieve their cultivation objectives. Cultilene is more than a substrate supplier, and wants to contribute to the success of the grower. With the CARA MET sensor, we can take big steps in this direction and help growers to capitalise on the valuable insights into the plant’s root zone and to keep the plant in better balance. This also fits perfectly within the Plant Empowerment principles, which we as Cultilene support.” 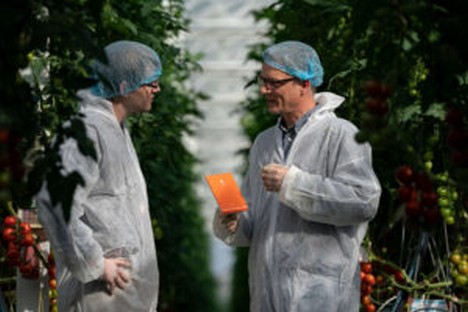 Further development
The possibilities of the CARA MET sensor will be further expanded next year. For example, the sensor – which is now only calibrated for stone wool – will also be available for other substrate types, such as coco peat, from the first quarter of 2020. In addition, the sensors will soon be able to be connected to the climate computer. In addition, a special CARA MET sensor for cultivation and a drain sensor are being developed. “With the addition of a sensor that maps the amount of drain, you as a grower have insight into all the currents that go in and out of the slab. So you leave nothing to chance and can take further steps in the field of precision growing. In this way, the need for water and energy can be minimised; something that perfectly matches Cultilene’s sustainability goals.”