Better light distribution over the crop

With a high-wire crop such as tomatoes, the light level decreases rapidly towards the bottom of the crop. Interlighting brings light to the spot in the crop where there is not enough light. This ensures that the lower leaves remain active and contribute to growth and production and you can also work with a higher plant density.

(Natural) Light level fades out in the canopy. LED interlighting compensates for it.

Lower leaves remain active and contribute to growth and production

Conclusion
All in all the benefits of adding LED interlighting in a high-wire crop can be summarized by having more vital leaves and an improved photosynthesis, plus the amount of lit hours can be raised which leads to a higher average fruit weight. Second it is possible to go to a higher plant density earlier in the season and light the crop for more hours which will give you more fruits per m2.

The combination with LED interlighting provides better control over climate and crop. This allows you to respond better to customer questions and you are more flexible in choosing a planting date. This leads to a consistent quality and higher yield at the right time.

LED interlighting contributes to stronger green parts of the plant. It gives a stronger and more vital crop with fruits of consistent quality. LED interlighting allows for higher light levels. The crops are lit from the right position, which leads to higher efficiency in light utilization. 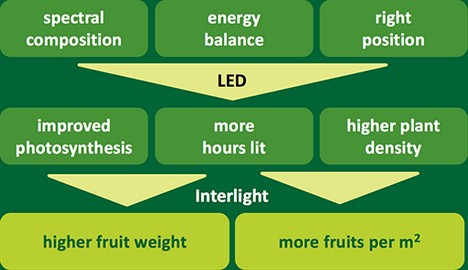