"In order to learn, you have to be daring"

"We only know little so far, but much more than a few months ago," says Wouter van den Bosch from Bosch Fruit, a 1.3-hectare blackberry cultivation company in Berkel en Rodenrijs. He has been growing blackberries since 2017 and soon started experimenting with lighting.

Initially with LED only, but since this year also with HPS. And since this summer no longer with just 24 light fixtures, but in the entire greenhouse. "Ultimately, that is the best way to learn how to grow blackberries all year round."

The latter is Wouter's big goal and after about three years he is already coming very close. "Only the last two weeks of December and next year a week in April we don’t harvest." 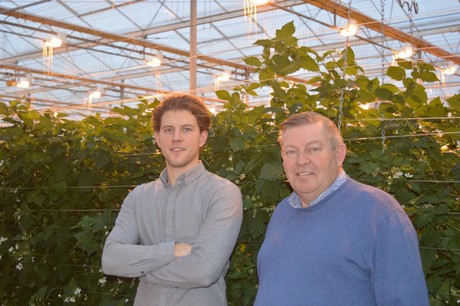 Daring
It all went very quickly for the son of pepper grower Jaco van den Bosch. When he started, he said he barely knew how to grow blackberries. Nevertheless, he almost immediately chose to use lighting. "You could say it was a choice out of dissatisfaction," says Wouter. “The market for greenhouse blackberries has been difficult over the past three years with low prices and a great dependence on what the clock is doing. Moreover, competition from Mexican open field cultivation is fierce."

Precisely because things were going so difficult, Wouter decided to invest. "A true entrepreneur," adds René Polak from BLV. At the end of the first fully HPS-grown blackberry cultivation, he’s interested in Wouter's story. René is Sales Manager Horticulture at the lighting producer, fully called BLV Licht- und Vakuumtechnik GmbH. The German company has been more prominent on the Dutch market in recent years. 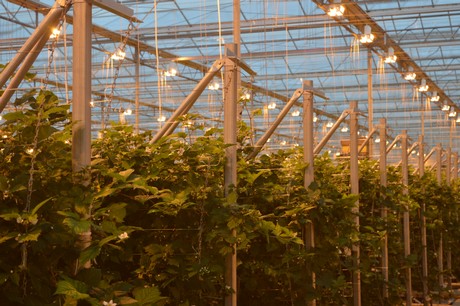 HPS all the same
"Together with Wouter, I spent quite a few hours to calculate everything well," says René. “Growers don't just take the step easily. It has to be feasible.” Both full-LED and a greenhouse full of HPS were discussed in depth. "The theory behind LED appealed and appeals to me," Wouter explains. “And blackberries, they don't like too much heat, while the light must be able to penetrate the dense crop well. That is why I initially tested LED inter-lights." 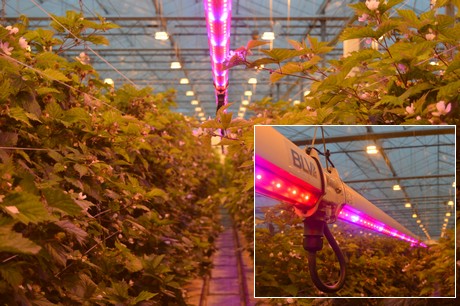 The LED interlights from BLV are tested in three half-rows in combination with HPS Wouter: "With that we also look at the possibilities with hybrid lighting."

Nevertheless, now HPS ishangs above the crop. Wouter was immediately open to a test at the start of the year with 24 luminaires (both 100 mmol and 150 mmol) after consultation with René. After all, the goal is to grow blackberries as well as possible all year round, and if little is known and moreover in a small crop like blackberry, relatively few experiments are taking place, then you have to gather the knowledge yourself, according to Wouter.

The trial was satisfactory and after half a year Wouter made the decision: the full 1.3 hectares could be filled with 1000 watt HPS luminaires from BLV. "With that you can really gain experience on a proper scale and fortunately the payback time is also a lot shorter than with full-LED." 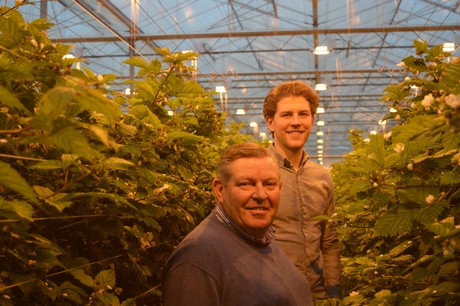 Wouter and René under the lights and between the plant rows

Unique
Wouter opts for four cultivations, two regular ones and one summer and one winter cultivation. The lamps are on for 18 hours a day at 150 mmol. "I am not disappointed in terms of heat," says Wouter, who also has three half-rows with LED interlights (with 75 mmol and 100 mmol) as a test. "We did have some quality problems at the end of the cultivation, and we still have to find out what caused this." René suggests that perhaps half power lighting with the top lights at the end of the cultivation can offer a solution. "One line switched on, one line off for example."

It indicates that both men learn new things with each round through the greenhouse. Knowledge that Wouter also shares with other colleagues. At the beginning of December, a number of soft fruit growers paid him a visit. According to both men, these visitors are also looking at the possibilities with lighting and they are monitoring developments at Bosch Fruit. Also because a blackberry greenhouse with HPS is quite unique. "I don’t know any others," said Wouter. 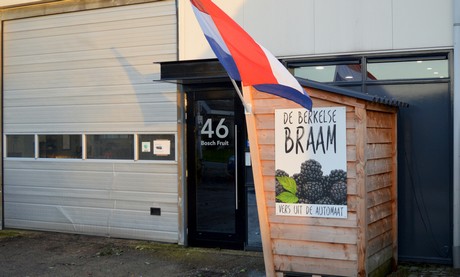 Fresh blackberries, also this winter thanks to the lighting

No switch needed anymore
In the coming year, he will also continue the large-scale experiment with the help of additional sensors (to measure light intensity and photosynthesis, among other things). The steps he is taking meanwhile generate, in addition to the interest of colleagues and researchers, also the interest from the sales side of the chain. "By growing almost year-round and with good planning at the request of the customer, to ensuring that they no longer have to switch between foreign and homegrown produce." And that is precisely the higher goal of all blackberry growers, to bind customers to a year-round Dutch product. "Lighting makes that possible," concludes Wouter.