20 hectare in Kazakhstan, several lettuce projects in Georgia, a high-tech greenhouse in Ukraine. It's not the most common nor the most easy countries that the team with consortium FoodVentures chooses to start new businesses. Managing partner Eric van der Meer explained how setting up a cultivation company in an ‘unexplored’ greenhouse horticulture area requires a different approach then to ‘just build a greenhouse around the corner’. 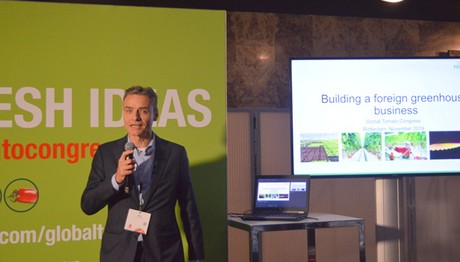 Chine project
Over the next year a new project in China will be erected. Together with a Chinese partner, FoodVentures will start growing cucumbers, lettuce, and tomatoes in China.

“The Chinese horticultural market is relatively young, so we're able to join in an early phase. We are convinced that by using a good quality greenhouse, we can grow high-quality, food-safe product, like what we did in Kazachstan by using the Ultra-Clima greenhouse. And of course we're also sure the market is in demand for this project."

These are in short the base circumstances required by FoodVentures to start an operation in a new country - requirements that they've sharpened throughout a decade of experience.

That's what Eric explained during the Global Tomato Congress last month. They will follow there standard business model that has been sharpened throughout a decade of experience, but is still based on growing close to the final consumer.

Corruption
“It is no rocket science," says Eric, “but not everybody dares to enter the market of ‘unexplored greenhouse horticultural areas’.” Whoever hears Eric’s stories will understand why this is true. Over the last ten years, the team with FoodVentures has seen it all.

Troubles with corruption and cultural differences, such as thieving employees and how to deal with them, are hurdles. “Never pay bribes," was one of Eric’s pieces of advice. “Then it is better to be delayed, like this year's delivery of glass for the greenhouse in Kazakhstan, because once you go overboard, you just keep on paying. Luckily we received a lot of support from the Dutch embassy and an anti-corruption agency in Kazakhstan.”

Growing markets
Yet even though it's not an easy market, there are considerable advantages to be gained from operating in non-conventional greenhouse horticulture countries. “Often, the middle class over there will grow rapidly, and with that, the demand for greenhouse vegetables will increase as well, which creates opportunities. Also, there is often much less competition from other growers, because of which a lower production amount then in the Netherlands shouldn’t form a problem.”

Nonetheless, it should be apparent that FoodVentures does not pick the countries at random. “On the contrary, we have a clear focus on the former Soviet-Union," says Eric. “We won’t be seeing FoodVentures in places like Africa or South-Amerika, although there are plenty of horticultural opportunities there.”

Growers need to be ‘operators’
For now FoodVentures will first finish up in Kazakhstan and then start in China - a project that was also preceded by an extensive amount of research, for instance, in the market. “Before a greenhouse is even built, there already needs to be a sales and marketing department set up, and the local financing needs to be arranged. It will also help if you manage to win over the local government and if you managed to find the right growers with extensive knowledge to manage the project."

Then there's the grower that's needed to make the project a succes. "Growers really need to be ‘operators’. Repairing a broken pump in Kazakhstan or China is something that the grower should be able to do on their own for the main part. Unlike in the Netherlands, a service team will not just come on over after a short phone call.”