Lose the tomatoes, bring in the sand

In the first weekend of January, the Bavarian Indoor Beach Volleyball Championships will take place in a curious setting. Whoever would visit this venue somewhere between spring and autumn, would only find organic tomatoes, boxes and packaging machines: the game takes place in the tomato warehouse of the Steiner family in Kirchweidach in Chiemgau.

The organizer of the 1st TomatOpen is the local sports club FC Kirchweidach. Its volleyball department -with chairman Christian Wolfertstetter- came up with the unusual idea. "We used to joke with our team mates about playing volleyball in the tomato hall," Wolfertstetter said. "When the operator, Wolfgang Steiner, heard about it, he was immediately thrilled." 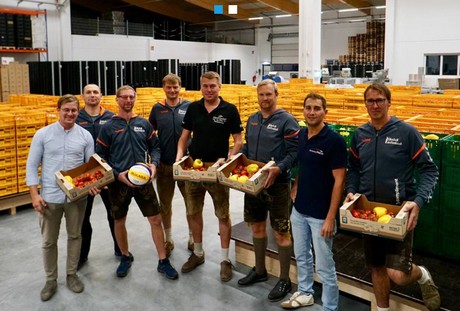 That's how a fun idea quickly became serious. Especially since it should not be just a fun event. "We want to offer something to the people in the region and, of course, advertise both ourselves and beach volleyball," the chairman explains. "This is not possible without high level volleyball."

Indoor championship moves back into focus
Consequently, the organizers simply brought the Bavarian Volleyball Federation on board. The BVV managers were also immediately in love with the idea and are now making it possible for the Kirchweidachers to host the Bavarian Indoor Beach Volleyball Championship. This took place in Munich in the past years, and was not really given enough attention. That is about to change.

In January 2020 there will be a free Bavarian Championship, in which non-Bavarian teams can also compete. In addition, points will be awarded for the Bavarian and German tours. The DVV also played here and the tournament was classified in category 1+. "That was always our goal", Wolfertstetter is pleased. "This makes the championship even more interesting for ambitious teams". He assumes that a high-class field of participants will play for the points and prize money, inspiring the spectators.

Sustainable use of sand in the tomato hall
Everything will take off mid-December. Around 80 volunteers will create the best possible conditions for players and fans. With several hundred tons of sand, two playing fields are to be created and a mobile grandstand will be erected for the spectators, offering space for up to 300 fans.

The sand will remain in the tomato hall for a total of four weeks. After the Bavarian Championships, the sand will remain there until 25 January. "We'll organize smaller tournaments and invite the neighboring clubs to join us." Wolfertstetter is full of anticipation. And then it will be time again for the sand to go out and the tomatoes to come bank in.