One month after the official kick-off of the second edition of the Urban Greenhouse Challenge, which invites students to design an urban greenhouse for the city of Dongguan (China), the teams are busy working on their first milestone report. In the meantime, we take a look at the participants of the challenge to find out what drives them and what their first ideas are.

UGC’2: some stats
The current edition of the Urban Greenhouse Challenge has attracted a striking number of 492 participants, who are part of 53 very diverse teams. While all the teams are multidisciplinary, the teams differ greatly in size: from 2 to as many as 35 team members. The participants come from 72 different universities spread out over four different continents, making this edition of the Urban Greenhouse Challenge truly international. A full overview of the teams participating in the UGC’2 can be found here. 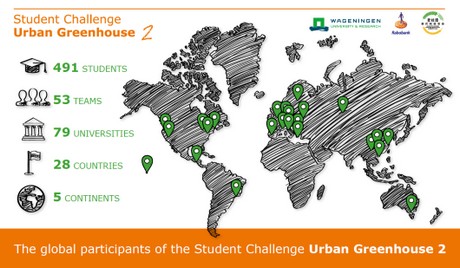 What drives the teams participating in the UGC’2?
While all the teams are working towards the same goal: designing an iconic and circular urban greenhouse for the city of Dongguan, the student-teams have different reasons for joining the challenge. Team Technotitlan 2.0 is strongly motivated to improve the quality of local livelihoods, learn from each other and gather more knowledge on subjects outside their own curricula. Team Coexist would like to contribute to reversing our negative impact on the planet. Team Sternstunde would like to contribute to social advancements while elevating their own capabilities. With 35 team-members who are divided into 7 sub-divisions. The Sternstunde team is the largest participating team of this year’s edition of the challenge.

Bringing urban farming to the next level: preliminary ideas of the teams
The student-teams have to take multiple aspects into account when designing their urban greenhouse. From the construction of the building, the food production, the circularity, the business model, to the social impact of the greenhouse: everything has to be thought out. Considering the many options the teams have in relation to all these aspects, the first ideas of the teams for the design of their urban greenhouse vary considerably. Team Animo aims to design an urban greenhouse that will become the link that connects the city with nature. At the same time, the greenhouse will provide locals with a place for holding meetings, education and scientific research. Team USP has other focal points. They aim to improve people’s relationship with food through re-considering the way food is provided to people and the way food production is embedded into communities. Finally, the Ohio State University Design Team wants to create a realistic, innovative, and forward-looking design that helps to push greenhouse food production forward.

The second edition of the Urban Greenhouse Challenge
This year’s edition of the UGC invites students worldwide to design an urban greenhouse for the city of Dongguan (China), which is part of the Greater Bay Area: one of the largest urban areas in the world. The participating student-teams are challenged to integrate food production with social impact in their designs. The urban greenhouses that the student-teams devise should produce safe and healthy food for the local neighbourhood and commercial markets, and should stimulate a healthy lifestyle and interactions with city dwellers.

The challenge is organized by Wageningen University and Research with the support of a wide network of partners, amongst which Rabobank and country Garden Agriculture, a Chinese developer of agricultural parks.