CAN (ON): Grower updates irrigation system with nanobubble technology

Green Circle Farm operates a seven-acre glass greenhouse in Leamington, Canada, where they grow cucumbers and peppers. Owner Isaac Friesen, like many other growers in the area, relies on successful crop harvests each year for his livelihood. As most growers will attest to, it is a demanding job at the best of times, and even harder when you do not have all the right resources. Factors such as climate, nutrient management, IPM and water quality are critical, and understanding how to efficiently balance them all is essential in maximizing crop production. A deficiency in any single area can lead to a number of issues such as root disease, blossom-end rot, or poor crop yields.

“Last year was a challenging year for us, and there were a number of things that we needed to improve in this greenhouse to get our production levels up,” reports Friesen. “Pythium is an issue in this facility, particularly in the summer. Our normal regime is to treat our irrigation water with ozone and perform five chemical root treatments throughout the season. Yet, despite our preventative measures this year, our peppers still showed signs of Pythium in the summer. To make matters worse, our ozone machine broke down which limited our treatment capacity. Remco Kostwinder, a local rep in the area with Green Search, suggested I look at oxygen nanobubbles as a low-cost alternative to help suppress Pythium and regenerate our roots. The science behind it made a lot of sense to me. Increasing oxygen levels in the substrate is a known benefit to plant roots, and I have always associated my root issues with either poor water management or low oxygen levels – both of which seem to go hand in hand. I had also heard of other growers in the area and in the Netherlands already using Moleaer’s system and were experiencing good results, so I was eager to give it a try.” 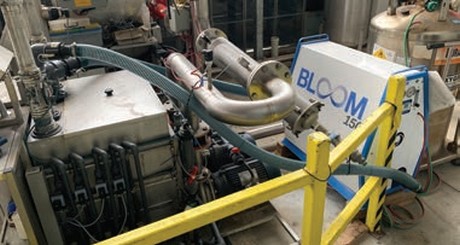 The Bloom Nanobubble Generator is easy to integrate with
existing equipment and requires very little space.

Moleaer’s nanobubble technology is an efficient method to rapidly elevate and maintain high levels of dissolved oxygen (DO) in irrigation water. The unique properties of nanobubbles are directly attributed to their miniscule size, which is about 500 times smaller than the diameter of a human hair. At this size, the bubbles achieve neutral buoyancy, moving through the water like a colloidal particle and evenly distributing a beneficial reserve of oxygen throughout the water column.

According to Moleaer’s CCO Warren Russell, “The unique advantage of our oxygenation system is the nano-sized bubbles our technology produces. Their large surface area and stability allows nanobubbles to transfer oxygen very efficiently into water. In addition to improving the economics of using oxygen, Moleaer’s nanobubbles also provide a low-cost treatment solution to help keep irrigation systems free from biofilm and the roots healthy. These added benefits separate Moleaer from conventional aeration or oxygenation systems and provide value beyond simply adding oxygen into water.” 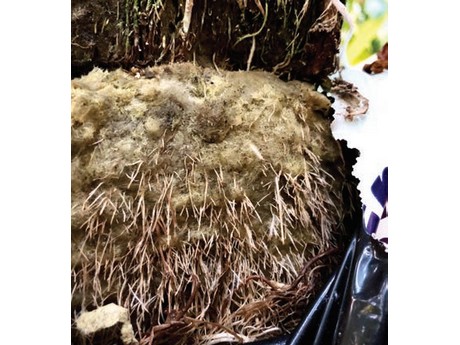 After installing the Bloom, the plants developed stronger and
healthier root systems.

“Although we could have installed the Moleaer nanobubble generator in our irrigation storage tank,” continues Friesen, “we elected to install the 150 gpm Bloom IQ nanobubble generator on our nutrient mixing tank and connected the unit so that it would operate when our nutrient system was mixing and injecting. Installing the system was simple as plumbing in a new pump. Once running, I was immediately impressed with the nanobubble generator’s performance. Within a few minutes of start-up, the DO levels reached our target of 22 ppm in the nutrient mixing tank and 18 ppm at the end of the emitters in the greenhouse.

“After a week of running the system, we observed new root development and improved plant vigor. Once we observed the plants responding favorably, I never bothered to get our ozone system fixed and I ended up doing two less chemical root treatment applications. Right now, we are in our last month of harvest, and this time last year we were averaging about 400 cases per pick. This year, however, we are averaging around 1600 cases per pick, which is a substantial improvement. Certainly, we have made other adjustments along the way, but the Moleaer nanobubble generator helped my plants recover from a difficult summer. What I am most impressed with is the sustained level of production we have seen right through the end of the season. I am confident that had we had this system in place from the start of the season, I would have been a lot better off.”