Figures and interpretation by Hans-Christoph Behr 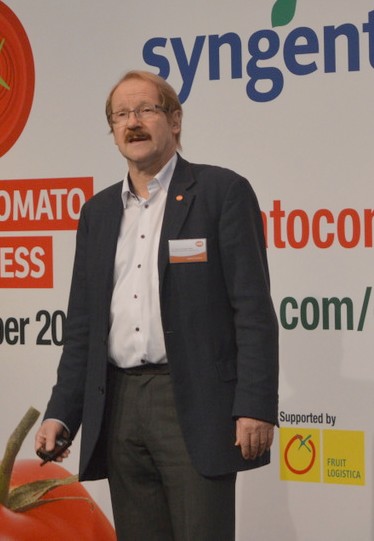 The tomato sector is large and is still growing. Not so much in volumes, but when it comes to the hard knocks. This is thanks to the growth in the speciality segments, for which the consumer often has more money left over than for the "standard" single or vine tomato.

During the Global Tomato Congress (view our photo report here), Hans-Christoph Behr of AMI (Agrarmarkt Informations-Gesellschaft mbH) did a tour around the fields, actually mainly greenhouses in this case.

Germany
Germany is a large country and also the most important market for tomatoes worldwide. This is despite the tomato consumption not being exceptionally high (11.3 kilos per household). The cultivation in their own greenhouses is on the rise there. 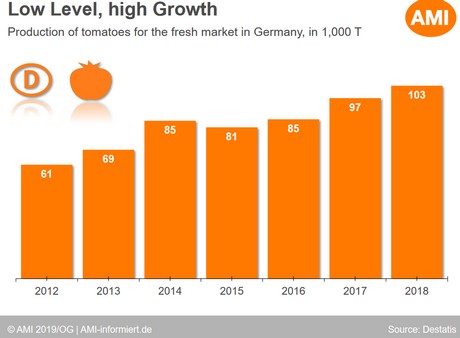 As is the case in many European countries, Morocco is gaining more and more ground. The largest tomato supplier, however, remains the Netherlands, with a bit of "re-export". This means that tomatoes from Spanish soil, for example, will end up in Germany traded via Dutch traders. 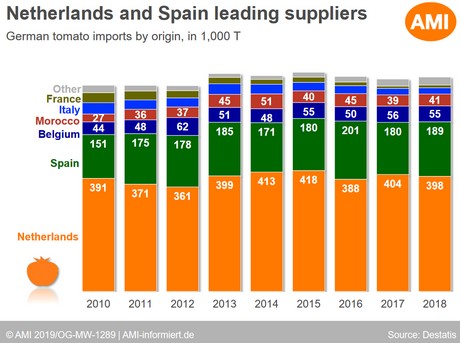 Around sixty percent of the German consumer spending goes towards cocktail and cherry tomatoes (likely the highest percentage in all of Europe), but specialities are on the rise. More than half of consumers (57%) buy at discounters.

Organic doesn't grow as fast. In 2018, "only" six percent of spending was for organic tomatoes. A lower percentage than in other European countries. It is noticeable that in Germany a lot of focus is on 'local' and that, both conventional and organic, much is sold under 'regional labels' in supermarkets.

France
Unlike in Germany, tomato production in France is falling. Partially because specialities are less popular, but still more so than others. The ratio of import versus own cultivation is more or less the same in France. 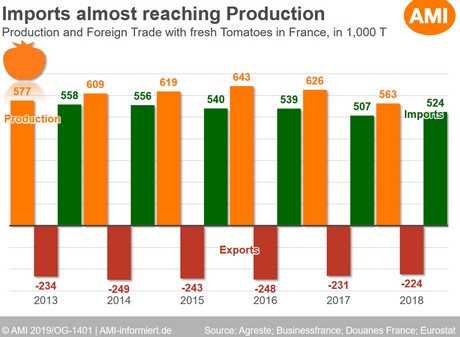 With a share of eight percent of the spending of French consumers, the share of organic is larger than in Germany. It is also striking that in France it is not the discounters, but rather the 'fresh markets' that are growing. Even the famous French hypermarchées can't copy this.

The Netherlands
The Netherlands grows for export. That should not be a secret and the figures clearly show it. The vast majority of Dutch tomatoes go to their Eastern neighbours. In comparison with other Europeans, the Dutchman himself eats relatively few tomatoes (7.7 kilos per household). 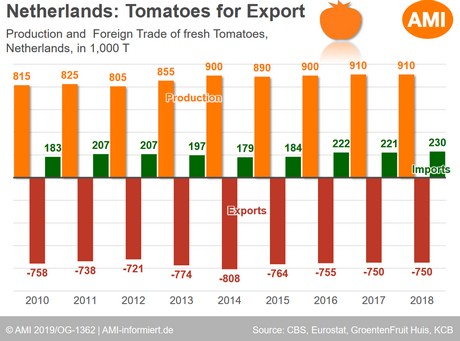 It is striking that exports to Spain and Italy are growing, in the case of these tomato varieties that, despite their own large productions, cannot be grown there due to the lack of high-tech greenhouses that the Netherlands has in abundance. 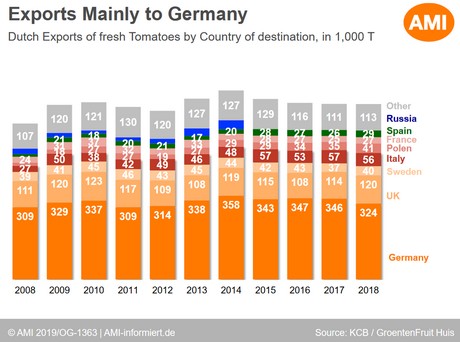 The United Kingdom
The cultivation in the United Kingdom is negligible in relation to the population that lives on the island. Hardly two hundred hectares of greenhouse can be found on the other side of the Channel, accounting for 67 thousand tonnes of tomatoes on an annual basis. 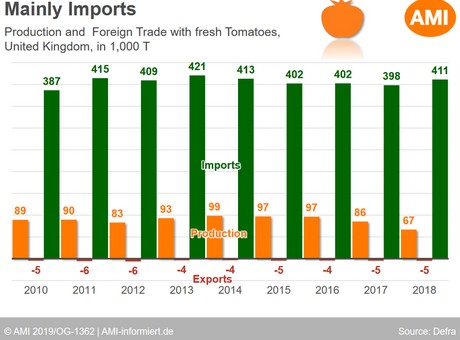 So it's not surprising that a lot is imported, of course from the Netherlands and Spain, but increasingly also from Morocco. An increase that is felt particularly hard in Spain. 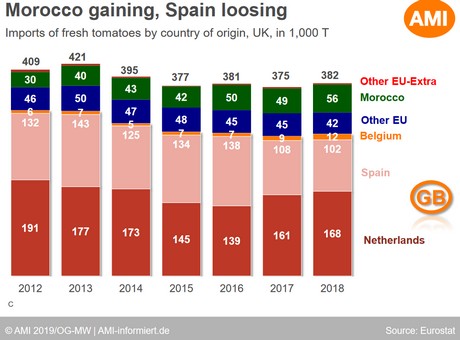 The spending pattern of the Brit is average with a consumption per household of around ten kilos on an annual basis. In addition, unlike the European mainland, tomatoes are on the shelves under premium private labels.

Spain
Spain then. The tomato country par excellence, although they will say the same in Italy. Spaniards eat a lot (13.3 kilos per household) and grow a lot, although the cultivation of fresh tomatoes has been declining in recent years. 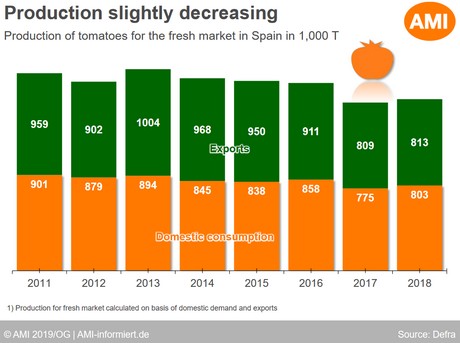 The majority of tomato exports go to Germany, although the number of destinations is certainly higher in winter due to demand from countries that cannot grow themselves.

The Spaniards are happy to point the finger at Morocco in difficult times, because tomato cultivation is on the rise there and competition is increasing. Logical and perhaps rightly so because Morocco does not have to comply with all European rules, but in part the Spaniards also have themselves to blame, according to Hans-Christoph. Spaniards and French people also invest heavily in the greenhouse cultivation on the other side of the Mediterranean. 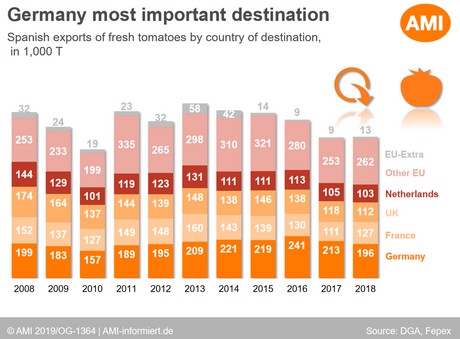 Discounters do not really have a huge share in Spain, while retail eagerly receives 58% of consumer spending on fresh tomatoes.

Italy
Italy is also a tomato country, with a consumption of no less than 23.3 kilos per household. Just like in Spain, it is important to point to 'fresh' here, as many industrial tomatoes are also grown (we will leave any abuses in that sector here for a moment). Fresh tomatoes are increasingly being grown in high-tech greenhouses. 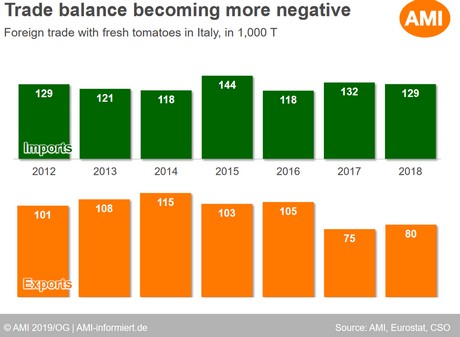 The supply of cocktail and cherry tomatoes in Italy is still small, with a share of 10 to 20 percent depending on the source, in a market that is still full of mainly 'normal' vine tomatoes and 'salad tomatoes', although the share is declining slightly . It is striking that the wholesale market prices are on average higher than in, for example, Germany or the Netherlands.

The tomatoes, which do not come from our own country, come mainly from the Netherlands, followed by Spain. What comes from France and Germany is mainly re-export.

Belgium
Belgian production is relatively stable (it fluctuates around 250 to 260 thousand tonnes), just like consumption. Unlike their northern neighbours in the Netherlands, Belgium does less to "re-export".

It is also striking that eighty percent of the tomatoes are sold through producer organisations. That used to be ninety percent. Something that you don't encounter to this extent in the aforementioned countries, Hans-Christoph pointed out. 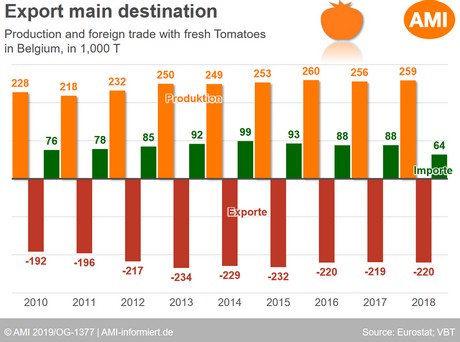 Belgium may be the country with a love for beef tomatoes, but the export of the beef tomato is declining. In the meantime, the share of cocktail and cherry tomatoes is increasing. 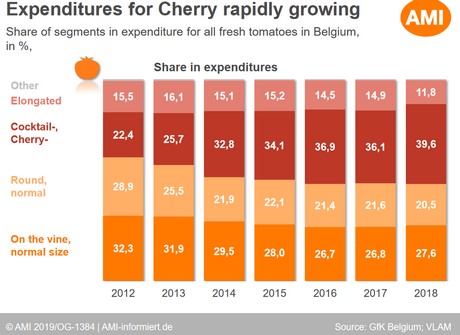 Conclusions in general
At the end of a long day full of numbers with interpretation, Hans-Christoph came on stage once more. His conclusion after all the sheets (view them here) with figures was that tomato cultivation is growing the most in North West Europe, while between 2009-2018, production in Italy, Spain and also the United Kingdom decreased. 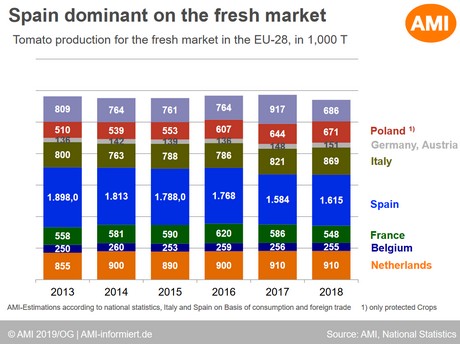 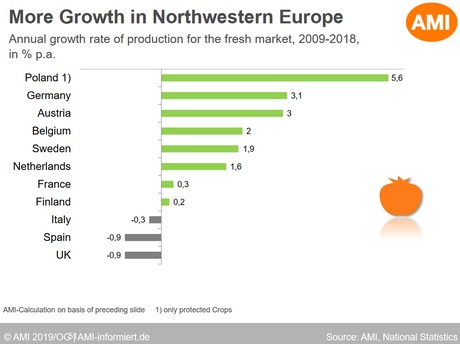 In addition to the growth of Morocco, the growth of Turkey is also striking. In the figures for Germany, that country did not (yet) come past, but they can certainly grow a bit there, it turns out. From 2013, an upward trend has been visible. 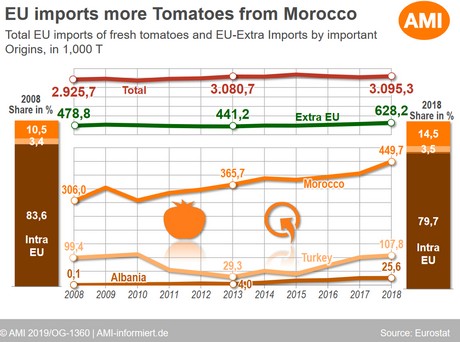 If you're curious about all sheets, click here. And all presentations, including those of other speakers, can be found here.