HAS-students temporarily back at BrightBox

Pim Vingerhoets graduated in Applied Biology and proceeded to do a masters degree in Plant Science at the Wageningen University. As part of his masters, he returned to the HAS University of Applied Sciences for an internship at BrightBox in his final year. Seeing as he is starting his new job in 2020, he will fill his time until then with temporary employment at HAS University of Applied Sciences, in which he again did research at BrightBox.

Pim researched 22 varieties of potted basil in combination with four light recipes. “Normally, growers are already using a specific variety”, says Pim, “and it’s up to you to research which lighting recipe fits best with that variety type. For this research, it was the exact opposite: we used the four standard light recipes already available in the demo-cell at BrightBox and applied them to a lot of different varieties to see their reaction to the recipes. 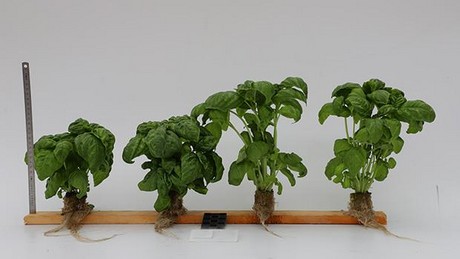 Big differences
As it turns out, there were significant differences between the plants. “We were already expecting this, but now we can actually prove it. You should look at it like a big puzzle made up of varieties and recipes, of which we put each puzzle piece in the right places. We are nowhere near done. Hopefully, the lectureship, in collaboration with the industry, can conduct further tests on certain varieties in the future.” The biggest challenge of the research was harvesting the plants. “There were nearly 9000 plants in total at BrightBox. Seventeen students helped me harvest them as well as separating the leaves from the stems.”

Underappreciated low hanging fruits
“Vertical farming is globally becoming more and more important”, Jasper says in regards to the research. “But for this type of food production systems, no varieties have been developed yet. The varieties that are available are rarely tested under LED-lights. Researchers would rather immediately start turning the light switches, while the choice for the best variety provides great profits relatively quick and simple. The production of the best variety is often twice as much, if not more, then that of the lesser varieties. Under conditioned circumstances, after one round of cultivating – in this case, 28 days – you can just about tell which varieties you should and should not use. Underappreciated low hanging fruits, so to speak.”