As Little Leaf Farms rapidly expands from its Massachusetts base, doubling in size in 2020, and then into New York, New Jersey, Pennsylvania and North Carolina, Bank of America has stepped in with over $18 million of financing, to be followed by another $20 million to help finance the company’s growth. 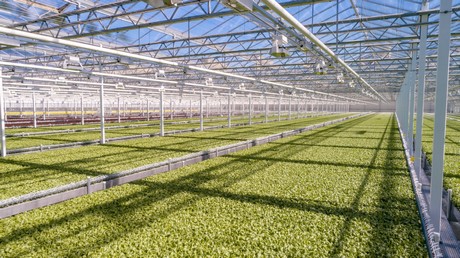 Little Leaf Farms, one of the best-selling packaged lettuces in New England, is producing over one million boxes of fresh greenhouse-grown baby green lettuce a month in Devens, Mass., delivered to every major supermarket chain in New England within 24 hours, year-round. When the company expands from five acres to 10 acres with the opening of a new greenhouse in May 2020 at Devens, production of the sustainably-grown lettuce – which is free of pesticides, herbicides and fungicides - will double to two million boxes delivered to New York and New Jersey’s major supermarket chains.

North Carolina expansion
A new wholly owned subsidiary of Little Leaf Farms will build a state-of-the-art greenhouse complex in Yancey County, creating up to 100 jobs, Governor Roy Cooper of North Carolina announced. The company will invest up to $86 million in Burnsville in a multi-phased planned expansion.

“Little Leaf Farms is excited to be coming to North Carolina and Yancey County in particular,” said Paul Sellew, CEO of Little Leaf Farms. “We are proud to be both leading the transformation of our food system to higher quality and locally grown products and contributing to the local economy.”

Although wages will vary depending on the position, the average salary for the new jobs will reach $53,700. The average wage in Yancey County is $32,490.

Little Leaf Farm’s project in North Carolina will be facilitated, in part, by a Job Development Investment Grant (JDIG) approved by the state’s Economic Investment Committee. Over the course of the 12-year term of this grant, the project is estimated to grow the state’s economy by $636 million. Using a formula that takes into account the new tax revenues generated by the new jobs, the JDIG agreement authorizes the potential reimbursement to the company of up to $1,366,200 spread over 12 years.

State payments only occur following performance verification by the departments of Commerce and Revenue that the company has met its incremental job creation and investment targets.