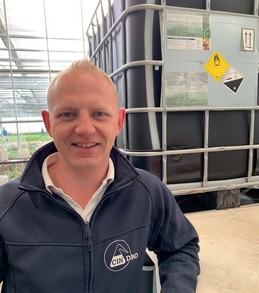 Crop rotations are the perfect moment to optimize hygiene at a cultivation company. Taking care of the entire water system is certainly part of that.

The most important source of pollution in water systems is biofilm. Persistent pollution that requires a good approach, during but certainly also after the crop rotation, says Joost Hovens from Cindro. "Every grower knows how reassuring it is to have the entire company ready with a clean slate for the new plants."

Biofilm is a layer of microorganisms, surrounded by self-produced mucus, that deposits on all surfaces in an irrigation system. Because of the mucus layer around the bacteria, the bacteria are more resistant to toxic substances such as crop protection agents.

"Bacteria in the film have a high resistance and can be 10 to 1000 times more resistant to disinfectants and toxic substances than ‘loose’ bacteria," says Joost. "That makes biofilm the most persistent hygiene problem in the greenhouse."

Preventing downward spiral
And that problem, will ‘unexpectedly’ also cost a lot of money, says Joost. “On the one hand because it affects the operation and reliability of, among other things, pumps and drippers, resulting in irregular irrigation, malfunctions and more frequent maintenance.

And on the other hand because it affects the quality of the irrigation water. This is because biofilm extracts crucial elements such as calcium and phosphate from the nutrient solution intended for the plant."

Subsequently, if the disinfection of the watering system is not in order, a downward spiral is threatening as Joost points out. “With pH fluctuations, the chance of fertilizer precipitation increases, which in turn is a breeding ground for new microorganisms. In addition, biofilm extracts oxygen from the irrigation water, and this process will accelerate faster after every watering.

The well-intended use of non-stabilized hydrogen peroxide to combat biofilm and harmful pathogens can cause additional problems, according to Cindro. “The use of non-stabilized hydrogen peroxide in current cultivation can seriously fail due to the lack of stability and effectiveness due to the offered conditions in fertilized irrigation water (Ph, EC, composition and temperature).

However, there is an optimization of the O2 saturation in the water (stronger microbiological growth), which means that in practice this method often works in opposite direction."

Remaining hidden resistant bacterial strains
With this fact and practical experiences, according to Joost, there is a direct link to resistance and the strongly decreasing effect of chemical crop protection agents in greenhouse horticulture that can be explained easily. "From customers I often hear that the effectiveness and treatment of irrigation water with crop protection agents has often fallen sharply within a few seasons."

In a biofilm-contaminated water system, the use of crop protection and insufficient disinfection will inevitably select the strongest microorganism, says Joost. “This micro-organism can then reside in the smallest area of the biofilm in the water system. By using chlorine, 35% H2O2 or acid, the biofilm cannot be 100% removed or disinfected. In a new crop, those crop protection-resistant strains are then still present, re-infecting the crop, and with effective preventive measures are even more difficult to combat."

Tackle from ‘the source’
Joost advises the application with Oxyl-PRO®S, the silver-stabilized hydrogen peroxide that Cindro produces itself. “Time and again I get very good results, together with the growers that I advise. It is a biocide with 50% hydrogen peroxide as active substance. The small silver particles that are bonded by a coating to the hydrogen peroxide particle ensure stabilization, selectivity (only responds to organic material) and effectiveness, independent of environmental factors, as opposed to normal hydrogen peroxide."

When applying the silver stabilized hydrogen peroxide it is important to do this as early as possible in the system. That is sometimes overlooked in practice, according to Joost. "It is more efficient to kill 1 microorganism at the front of the system and thereby prevent biofilm than to fight 100,000 microorganisms in dirty daily supplies, filters or other potential sources of contamination or dead parts in the system."

Proper cleaning during crop rotation is important for a complete disinfection, but maintaining low concentrations of Oxyl-PRO®S in the water system ensures a clean water system without biofilm throughout the entire cultivation. “The entire cycle from biofilm to cultivation problems starts with the presence of microorganisms and the right conditions.

A well thought-out dosing strategy has a direct influence on the stability of pH and availability of oxygen in water, in addition to the obvious reduction in micro-organisms. With this, the crop grows more uniformly with a better root system, nutritional intake and all subsequent benefits in cultivation regarding crop resistance, crop protection, crop care, labour performance and general plant, fruit and harvest quality. And that in all conceivable irrigation systems."