A guide to grow light spectrum

Choosing the right grow light spectrum for your commercial operation can be a challenge. Many LED grow light suppliers have conflicting information on the topic due to bad marketing or simply a lack of knowledge in plant and light research.

What is grow light spectrum?
Light spectrum is the range of wavelengths produced by a light source. When discussing light spectrum, the term ‘light’ refers to the visible wavelengths of the electromagnetic spectrum that humans can see from 380–740 nanometers (nm). Ultraviolet (100–400 nm), far-red (700–850 nm), and infra-red (700–106 nm) wavelengths are referred to as radiation.

As growers, we’re most interested in the wavelengths that are relevant to plants. Plants detect wavelengths that include ultraviolet radiation (260–380 nm) and the visible portion of the spectrum (380–740 nm) which includes PAR (400–700 nm), and far-red radiation (700–850 nm).

Either way, the amount of each waveband that your crop receives will have significant effects on growth. Let’s learn more about how this works. 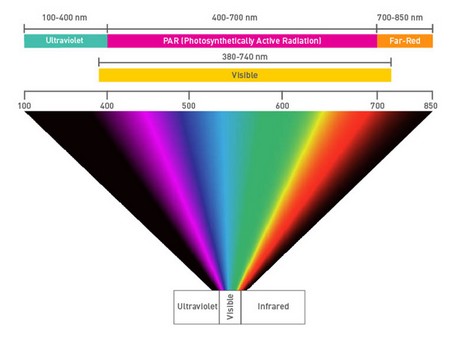 How do plants respond to light?
Plants use light for photosynthesis and photomorphogenesis. Photosynthesis is the process by which plants and other organisms convert light energy into chemical energy. Photomorphogenesis refers to how plants modify their growth in response to light spectrum.

One example of photomorphogenesis is a plant bending toward a light source. Light also affects plants’ developmental stages, such as germination and flowering.

The light that plants predominately use for photosynthesis ranges from 400–700 nm. This range is referred to as Photosynthetically Active Radiation (PAR) and includes red, blue and green wavebands.

Photomorphogenesis occurs in a wider range from approximately 260–780 nm and includes UV and far-red radiation.

Why use light spectrum when growing crops?
Plants have photoreceptors that can trigger different growth characteristics when activated by photons of specific wavelengths. So by controlling your light spectrum you can affect powerful changes in plant growth.

Growth characteristics that can be affected using spectrum are listed below:

It’s important to note that activating plant response using light spectrum is one component of a larger process and results are heavily dependent on many factors such as light intensity, photoperiod, growth environment, plant species, and even plant variety.

How does each light spectrum affect plant growth?
Although results are dependent on other factors, there are general rules of thumb that you can follow when using light spectrum to elicit different plant responses.

Outlined below is an overview of how each waveband is used for horticultural purposes so that you can trial light spectrum strategies in your own growth environment and with your chosen crop varieties.

UV light wavelengths (100–400 nm)
The UV waveband is outside of the PAR waveband and may offer new applications for horticulture that have not yet been well defined.

It’s easiest to think of UV radiation in similar terms to its effect on human health. We all know that you can get sunburned from extended exposure to UV light, while short exposures often result in a tan instead. In this respect, plants and people react similarly to UV light.

Potential of UV light include increased leaf coloration and thickness, as well as resistance to environmental stress, pests, and fungus. The amount of UV required to achieve these potential benefits is not well defined. Additionally, the dangers associated with UV are not yet well quantified.

A minimal amount of blue light is required to sustain normal plant development. In terms of adjustable spectrum lighting strategies, if we were to equate red light to the engine of your car, then blue light would be the steering wheel.

When combined with other light spectrum wavebands, blue light promotes plant compactness, root development, and the production of secondary metabolites. Blue light can be utilized as a growth regulator, which can reduce your need for chemical plant growth regulators (PGRs). Blue light can also increase chlorophyll accumulation and stomatal opening (facilitating gas exchange), which can improve overall plant health.

Blue light also promotes other secondary metabolic compounds associated with improved flavor, aroma and taste. For example, blue light treatments have been shown to improve terpene retention in some varieties of cannabis.

Green light wavelengths (500–600 nm)
Since chlorophyll does not absorb green light as readily as other wavelengths, many have written off the green waveband as being less important to plant growth. This lower chlorophyll absorption rate, compared to blue and red light, is what makes most plants appear green. Depending on the plant, leaves generally reflect 10-50% of green waveband photons.

In contrast to assumptions, studies of green light in crop production have concluded that green light is important to photosynthesis, and especially in a plant’s lower leaves. Around 80% of green light transmits through chloroplasts, whereas leaves absorb approximately 90% and transmit less than 1% of red and blue light.

So what does this all mean? When light is plentiful, chlorophyll reaches a saturation point and can no longer absorb red and blue light. Yet, green light can still excite electrons within chlorophyll molecules located deep within a leaf, or within chloroplasts lower in the plant’s canopy. And so, green light enhances photosynthetic efficiency—potentially increasing crop yields, during bright light conditions.

Additionally, the ratio of green to blue and red wavelengths signals to the plant a leaf’s canopy position. This can induce morphological changes to maximize light absorption. Green light also plays a role in regulating stomatal aperture (opening and closing of plant pores that make gas exchange possible).

Red light wavelengths (600–700 nm)
Red light is among the most effective wavebands at stimulating photosynthesis and promoting plant biomass growth.

Plants grown under only red light tend to become stretched and tall with thin leaves- a generally undesirable growth pattern. However, adding the correct amount of blue light to balance out the red light can result in more compact plants with thicker leaves.

For this reason, it’s always important to consider the multiple ways in which different wavebands of light influence each other rather than relying solely on one waveband for healthy plant development.

Far-red light wavelengths (700–850 nm)
Far-red light is at the far end of the red spectrum between 700–850 nm. Studies have found that plants respond to wavelengths up to 780 nm. Recently there has been increased attention and research related to the potential for far-red light to increase and control growth.

Far-red light can induce a shade avoidance response, which results in extension and stretching (read below for more information on shade avoidance). Far-red light also promotes flowering in long-day plants and leaf expansion, which increases the available surface area to capture photons for photosynthesis. There have also been recent reports that far-red can increase efficiency of the PAR waveband associated with photosynthesis.

What is shade-avoidance response?
In nature, sunlight contains almost as much far-red light (20%) as red light (21%). Leaves at the top of the canopy are most exposed to sunlight and readily absorb red light while reflecting or transmitting most far-red light.

As a result, leaves lower in the canopy have less red light available and receive a higher proportion of far-red light. This relatively low red to far-red ratio triggers stems to extend and leaves to expand to intercept more sunlight. Supplemental LED lighting can induce this response.

While scientists do not fully understand how far-red light modifies plant growth, it plays a critical role in photosynthetic efficiency. The “Emerson Effect” is the notion that two photosystems, one that is most sensitive to 680 nm photons and one to 700 nm photons (and far-red light up to 850 nm), work together to optimize electron transport and photosynthetic rates. The systems are synergistic, that is, their joint contribution to photosynthesis is greater than the sum of their individual contributions. Additional research may uncover the best way to deploy far-red across varied crop types and varieties.

How to use light spectrum for plants?
Using the guidelines above, growers can make reasonable assumptions for how their crops will react when adjusting their grow lights’ spectral ratios using smart horticultural lighting software.

In summary, we see the following applications of light spectrum for horticulture to be common:

Green Light: We understand that green light is important to photosynthetic efficiency and plant development, though these processes are still being explored. Adding supplemental green light is most important when there is no sunlight to provide adequate green light to crops. The best pink LED grow lights take this into consideration and offer an adequate amount of green within their pink spectrum.

It would be impossible to provide a complete list of photomorphogenic processes for all plant cultivars, so Lumigrow instead recommends that you run your own light spectrum trial in a R&D space before applying light spectrum strategies for your production environment.

LumiGrow Research also provides some of the latest plant and light research so you can apply already proven light spectrum strategies to your commercial application.