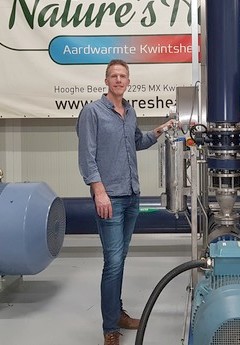 With the geothermal heat project Nature's Heat, thirteen greenhouse horticulture companies in Kwintheul will be provided with sustainable heat. The project, completely turnkey (which is remarkable) could be a blue print for other geothermal products. Besides the technical success, the initiative has turned the involved companies into a tight community, according to Paul van Schie of tomato cultivation company Fa L.A. van Schie. Besides grower and initiator, he is also the operator of Nature's Heat, as the geothermal project is called.

Since 2018, thirteen greenhouse horticulture companies heat their Westland greenhouses with - mostly -  geothermal heat from close by. The heat is captured at a depth of 2.4 kilometer and comes out of the ground at 87°C . The greenhouses use the heat at 40 to 50°C. The return heat is 30 to 35°C.

Van Schie requested a permit to capture and use geothermal heat at around ten square kilometer. To realize the necessary scale enlargement, eight more horticulture companies joined the project as stakeholder in 2014.

The project now consists of a total area of 64 hectare of greenhouses. The participant realize a reduction of 22 million m3 gas and a reduction of 40 million kilo CO2-emissions per year.

First turn key geothermal project in the Netherlands
"We were neighbors, but we have become a community with common interest in a well functioning heat installation", according to the Van Schie about the unique approach of his initiative. Nature's Heat, moreover, is the first geothermal heat project in the Netherlands which has been completely executed turn key. This means that the party which provides the drilling for heat has accepted all risks. "This is actually obvious: the contractor has knowledge about drilling and the construction of the above-ground installation. It is only logical that the risks are there."