On 24 October, a partnership agreement was signed by education and information centre for greenhouse horticulture, Tomatoworld and Cau Futong from Beijing.

In addition to three European companies (Novarbo Oy, Huhtamaki and Surplus Systems GmbH), Tomatoworld is now also partnering with an Asian partner. From January 2020, the Dutch division of Cau Futong will become a gold member of Tomatoworld. 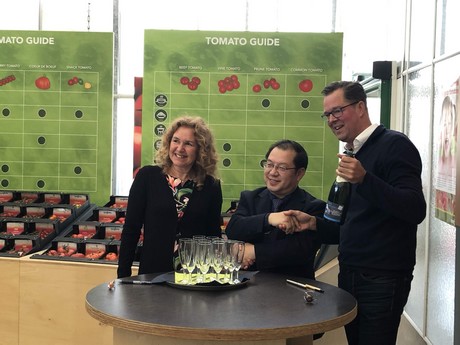 The demand for safely produced vegetables for worldwide vegetable cultivation in the greenhouse horticulture sector and knowledge about sustainable production is increasing. In one of the largest countries in the world, China, guaranteeing food safety is an even greater challenge. CAU Futong's mission is to make a tangible contribution to this growing demand for safely produced vegetables in northern China.

Since the climate in northern China is usually dry, the smart use and re-use of water, but also of fertilizers, is of vital importance. As a high-tech company, Futong, part of the China Agricultural University (CAU), has been working successfully with the Dutch climate automation company Hoogendoorn Growth Management and logistics innovator Codema Systems Group for years to realize projects in China.

The agreement was signed by Miranda van den Ende (Managing Director of Tomatoworld), board member Jos van Mil (Greenco) and Zhang Tianzhu (Chairman of Cau Futong) during a ceremony on Thursday 24 October.