On Friday, November 1, the winner of the Hillenraad100 - 2019 edition was announced during the Hortigala of the Year in the Ridderzaal in The Hague. To the great surprise of the more than two hundred attendees from the entire horticultural sector, KUBO Group took to the podium as the new number one. The evening, which was opened by Minister Carola Schouten, had more surprises. The list this year has no fewer than 13 newcomers, the top 10 has been considerably shaken up and the 500+ outside category now has ten large companies. 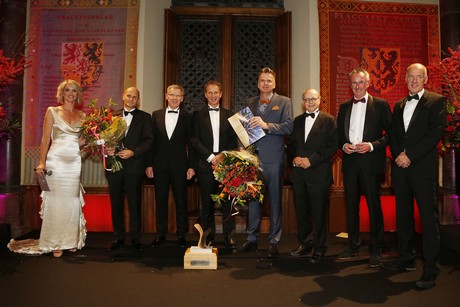 "The major changes in this year's Hillenraad100 show which horticultural companies are successful in a rapidly changing world and which companies are clearly looking for a solid, international position," Martien Penning of Hillenraad said. Based on an extensive evaluation model, grading by the Peer Group and the vision and opinion of the Expert Committee, Kubo Group emerged as the overall winner of the Hillenraad100 competition and also captured the Technology Company of the Year 2019 theme prize. "Kubo Group is a star player in high-quality greenhouse technology. It is responding extremely well to international demand for production under controlled conditions, where both technology and its operational application are central," was the verdict about this winner. During the Hortigala of the Year, a number of other companies also received a prestigious prize in various categories.

Call to action
Chair of the Expert Committee, Ben Verwaayen, gave a glowing speech in which he had a clear message for the directors, shareholders and policymakers present.

Future-oriented and international
The Hillenraad100 - 2019 edition shows that the leading Dutch horticultural companies are operating internationally, continuously innovating and are getting ever closer to their customers. This applies in particular to Vreugdenhil-Klugt Combinatie, which was consequently named the Most Forward-Looking Enterprise of the Year 2019, and Nature's Pride, which can call itself International Company of the Year 2019. The reason for their accolades: "Companies like these understand very well what successful business is all about, delivering customer value and constant innovation are thus a benchmark for the entire horticultural cluster." There was also praise for Royal Brinkman, which was named Family Business of the Year 2019. "This family business delivers world-class performance in every respect," can be read in the Hillenraad100 magazine, which was under strict embargo until Friday 1 November. In the outside category 500+ of large companies, Rijk Zwaan was once again the best: "Undisputedly a world-class Dutch company."

Hillenraad100 magazine
As usual, the new Hillenraad100 magazine was also published this year at the Hortigala of the Year. This not only shows how much the Top100 list has been shaken up, it also contains interviews with external experts and gives a broad picture of the international development of the Dutch horticultural sector. Together, the companies documented account for an annual turnover of € 21.6 billion, a great deal of employment and, above all, an enormous contribution to a green living environment and safe, healthy and tasty food for a world that requires sustainable innovation. This year, the Hillenraad100 again shows the best and brightest in the horticultural sector, with technology as the major flavour in this edition.