US (TX): Researchers can now quickly, accurately scan for nutrient content in the produce aisle

The first quick, accurate, nondestructive and portable way to scan produce for nutrients has been demonstrated by a team of Texas A&M AgriLife Research scientists. The same scan can also identify diseases in living plants before visible symptoms appear.

The results were published in September in the chemistry journal ACS Omega, in an article titled “Rapid and non-invasive typing and assessment of nutrient content of maize kernels using a hand-held Raman spectrometer.” The team was led by Dmitry Kurouski, Ph.D., assistant professor of biochemistry and biophysics at the Texas A&M University College of Agriculture and Life Sciences.

“The method could eventually be used to quickly estimate the economic value of grain in a field or grain elevator, or predict grain’s starch content,” Kurouski said. “This could change the economy for farmers and consumers.” 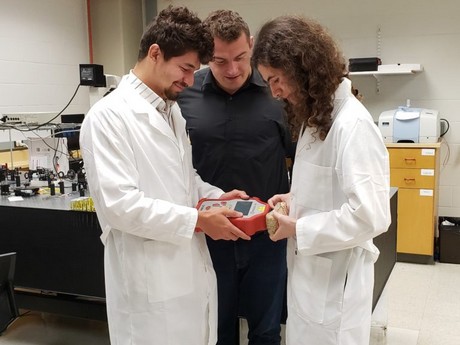 The analysis of corn nutrient content with a portable Raman system “is very impressive and opens the path for field use in various agricultural applications,” said Torsten Frosch, Ph.D., an expert in spectroscopic sensors who was not involved in the study. Frosch leads the spectroscopic sensors group at Leibniz Institute of Photonic Technology, Abbe Center of Photonics, Friedrich Schiller University Jena in Germany.

Kurouski and his team scanned corn kernels and plants by Raman spectroscopy, which measures how molecules scatter harmless laser light. A handheld spectrometer the size of a kitchen scale was used to scan six different red or yellow corn kernels. Each scan took about a second and provided data to calculate levels of protein, carbohydrates, fiber and carotenoids inside each grain. Established methods of nutrient analysis — which are either less accurate or more time consuming than the team’s method, or destroy samples — confirmed the results.

“That’s huge,” Kurouski said. “When it comes to personal diet, if I have this technology then I can scan food that I consume, determining its nutrient value right on the spot.”

The researchers then used the same tool to scan the light scattering signatures of corn plants growing in a field to identify the different varieties. Corn was the country’s largest crop in 2019, according to the U.S. Department of Agriculture, and identifying corn varieties in the field would be helpful for both plant breeders and farmers. Other potential applications of the technique abound in food production. In a study published in May, the team diagnosed the devastating citrus greening disease by observing telltale signs inside plant structures months before any visible symptoms appeared.

Kurouski was inspired to apply Raman spectroscopy in agriculture after talking to farmers. Right now, two types of precision technologies are available to identify problems in a field of crops: satellite imaging and molecular biology. Both have serious drawbacks. Imaging is not specific enough — it might detect that crops are turning yellow but not the reason why. Molecular biology can accurately diagnose a problem but requires experts to prepare samples, which easily costs tens of thousands of dollars for agricultural applications. Because of the drawbacks, farmers tend to ignore these technologies, Kurouski said.

“From talking to farmers, I understood what they wanted: no sample preparation, quick turnaround, and at least 70%-80% accuracy,” Kurouski said. “I realized that Raman spectroscopy could fulfill all these requirements.”

Kurouski’s lab members plan to work with industrial partners to commercialize the technique so it can be broadly applied as a tool for farmers, plant breeders and consumers.