"Our office in particular became too small"

By the time this article is online, the desks at Agricultural Projects Holland have been disassembled and if all goes well, they have been put together again. The team, about twenty people strong, has moved to a brand-new building in De Lier. And it was about time, Egbert Bruins and Jos van Opstal from the greenhouse builder told us during the final preparations. "In particular, our office became too small, certainly in view of our engineering activities." 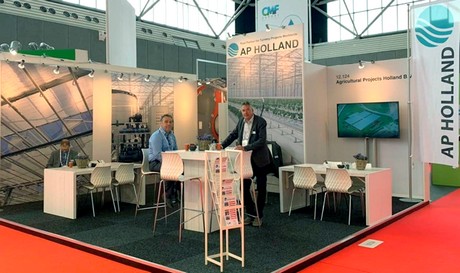 Jos van Opstal, second from the left and Egbert Bruins, fourth from the left, this year awaiting the construction of the new building at GreenTech

Until recently, the AP Holland team worked from several buildings in Kwintsheul and one in Naaldwijk. The warehouse has already been expanded over time, but additional office space turned out to be a problem at the current locations. "In our new building on a beautiful visible location on the main road between Westerlee and Delft there is room for more desks."

"The relocation is badly needed for our company to operate even more effectively for our customers and also to create more workplaces for our future colleagues."

They currently have projects in the United States and Russia. “In the United States, we are at the moment working on the development of a special greenhouse that will also serve as a restaurant, while in Russia two projects of around 25 to 30 hectares are under construction. That we are also having an office built in the meantime is something that customers will not notice at all."