After day one of the PMA Fresh Summit in Anaheim, California, it was on Friday evening, October 19, time for Dutch-language drinks which has now become a tradition. At the invitation of the Dutch Consulate and the Ministry of Foreign Affairs, eighty thirsty men and women had come from the Convention Center to a room in the Hilton Hotel to chat while enjoying a drink. 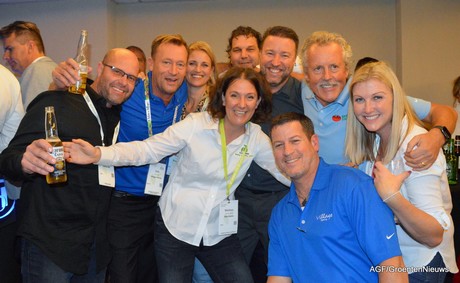 After several ‘cheers’ had been heard and the drink gathering had properly started, Vincent Storimans of the Consulate, Erik Plaisier as Agricultural Counselor on behalf of the Netherlands in Mexico and Mariska Dreschler of GreenTech briefly spoke.

Of course, everyone was thanked for their visit, after which the successful times for the Dutch greenhouse horticulture sector was also referred to. In North America, Dutch or Dutch-speaking companies, because also in Belgium people participate well, have gained a firm foothold. No project starts without the involvement of Dutch-speaking suppliers, while Dutch-speaking growers also (co-) manage greenhouse horticultural companies in America or Canada. Growers with whom it was nice to catch up with again over drinks.