Marco van Overbeek, Gardener’s Pride, looks back on the first year of cucumbers:

“The labor needs to be tighter, and the production increased” 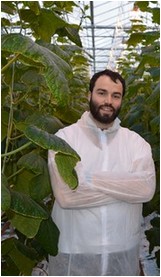 “Recently we did our final rounds, and in a week or two, we will truly cut the last cucumbers of the season”, says Marco van Overbeek of Gardener’s Pride that, besides their tomatoes, also started growing cucumbers this year. At the beginning of January, they started the high-wire cucumber cultivation on 3.7 hectares. Now it’s time for an evaluation, and the customers have placed the orders for next year. In 2020, Bakker Barendrecht and Albert Heijn can once again count on the tomatoes and cucumbers.

“The cultivation went well, and in terms of production, everything ran smoothly”, Marco concludes. “We have achieved the budget, but in terms of labor, we still have a lot that needs improving.”

He already knew that labor would be different for cucumbers then for tomatoes, but this season he could experience it himself. “With cucumbers, you can easily go from three to seven rounds a week. You need to be able to shift on time. The same goes for bags, cleaning, and rings. When you’re not fast enough, you can easily fall behind due to the fast growth of cucumbers during spring. That makes it a great challenge in terms of cultivation. Tomatoes are completely different, and everything is a bit more standard.”

Two high-wire cultivations took place in Klazienaveen this year. “The tighter your grip on the labor required for cucumbers, the better it is for the production. A tight planning shows immediate results in terms of production. It simply saves you hours of work per meter.” 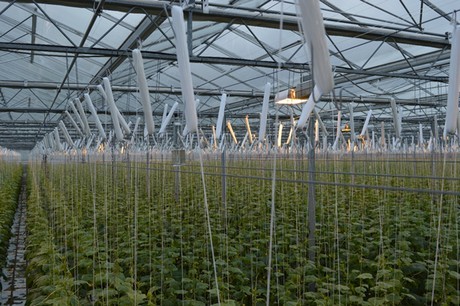 The cucumbers in Klazienaveen hang on organic and compostable horticulture wires this season.

Breaking or cutting the leaves?
For the next season, the budget for the cucumbers has been tightened. That has to be doable with some minor adjustments, and the experiences gained from the first year of cultivating, Marco says. As an example, he mentions the question of whether to break, trim, or cut the leaves. “This season, we started with trimming, to be on the safe side. This does mean an increase in labor, but we wanted to prevent wastage due to molding, and it worked. After that, when going into spring, we started breaking the leaves.  This also proved to work well, also because the crops become dryer on the bottom during the season.”

Photo right: a look inside of the greenhouse in September