Harvest up to one and a half bunches extra or stop the cultivation early. It is possible thanks to dispensing ethylene gas in tomato cultivation. The British company Restrain developed the Restrain Generator for this purpose. A few years ago, the CTGB enabled this for the Dutch and French growers, since this week it is also permitted in Belgium and England to use the Restrain Generator to ripen tomatoes on the plant. 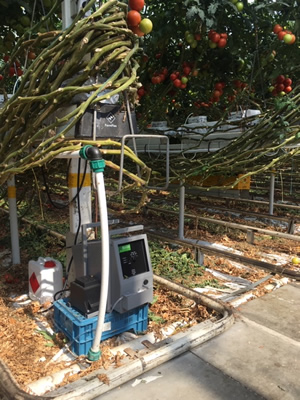 "The goal in tomato greenhouses is to harvest high numbers of good quality tomatoes. Ripening of tomatoes is often a problem at the end of the season. Strict residue legislation is a challenge for achieving full yields. With zero residue treatment from Restrain you can safely speed up the ripening process on the plant with natural ethylene gas," explains Dirk Garos.

Restrain with ethylene gas has been in use for much longer in potato and onion storage. Restrain expects to take major steps with the expansion in permission for the Belgian and English cultivation. Another factor is that the application is 100% natural. No chemistry, no residue and no side effects.

In the development of the Generator, a lot of attention has been paid to simplicity. "It's a plug and play model," Garos concludes. "We install it, and the grower is ready for it immediately. That directly results in lower labor costs, more kg and tasty tomatoes!"