Gerard van den Heuvel from the bulldozer at Gemüsebau Steiner:

"Leveling a 7.5 meter difference in height is a nice job for us"

“We can see the Alps in good weather, but we cannot go into the mountains. That is, if the weather remains good. If it gets too wet, we will be forced to take some time off," says Gerard van den Heuvel of Grondverzet Van den Heuvel from the German town of Emmerting. Bavarian greenhouse vegetable and strawberry grower Gemüsebau Steiner is having five hectares of greenhouse built.

The team on location: a quick picture and then back to work

The ground must be well leveled out before the greenhouse can be built. A nice job for the team of Grondverzet Van den Heuvel, which also leveled out the ground during the three previous construction phases. “This time we are dealing with a 7.5 meter height difference on the 5-hectare plot. That should ultimately come to 0, and we want to keep costs to a minimum, so we strive to keep all the soil in the site," Gerard explains.

Emmerting doesn't have regular soil, Gerard explains. “The underground consists of gravel, the layers on top of the gravel are made up of very fatty clay. That is because there is a river nearby. Certainly, the fatty clay makes it a big challenge when it is wet.” 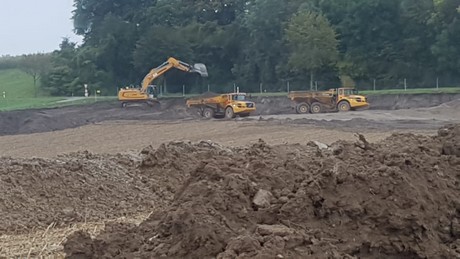 The groundwork was started on Tuesday 1 October. "The plan was to get the job done in three weeks, but that will be four because we also have to level a piece of land for the greenhouse builder to store the materials."

During the first week, the weather was better than expected and Gerard hopes that it will stay that way for a while. "And in the meantime, we consciously make long days, sometimes until eight o'clock in the evening, so that we progress nicely and have a some time to spare, in case there are heavy rains."

Germany good growth market for earthworks
As stated, the Grondverzet Van den Heuvel team was previously also active for Steiner, but then Germany is a good market for earthworks anyway, according to Gerard. “In particular 2017 and 2018 were top years for us in Germany. The fact that Germany is a good market is thanks to the fact that greenhouse horticulture is booming here, resulting in new greenhouses. Moreover, you quite often have to deal with larger height differences. In the relatively flat Netherlands and Belgium that is different and it is often also about rebuilding a greenhouse. The land has then already been leveled, so there is less work for us."

Before the winter starts in Germany, the men, who in between are just going home for the weekend, hope to be able to go to a new project again. And then forward to 2020, the year in which the family business has been in existence for ninety years. Piet van den Heuvel founded the company in 1930, after which his sons took over the company in 1965. Meanwhile, the third generation is at the helm, Gerard and his brother Peter.