The Charles Drew Transition Center is one of the only schools in the United States dedicated to improving job security for their special education students with a wide array of skill-building programs. The Drew Horticulture Program educates students between the ages of 18 and 26 with physical, cognitive and health impairments and provides them with valuable agriculture skills before they enter the workforce. Within the past 6 years, the program has grown to such heights that it is now also a force to be reckoned with in combating the lack of affordable, fresh produce in the Detroit metro area.

While the Drew Horticulture Program originally used two GrowSpan HydroCycle NFT Systems, they have now expanded to include an additional two GrowSpan Low Pro Tunnels, a HydroCycle Vertical Aeroponics System, a HydroCycle Vertical NFT Lettuce and Herb System and three HydroCycle Pro NFT Lettuce Systems. The new GrowSpan structures and HydroCycle Systems have allowed the program to expand their selection of produce with plenty of room for experimentation and greatly increase their yields, including increased lettuce production from 500 heads every four weeks to harvesting up to 4,000 lettuce heads every five weeks. Tomatoes, peppers, radishes, arugula, endive and mizuna are also grown in the tunnels and hydroponics systems, just to name a few.

Michael Craig, the head instructor for the Drew Horticulture Program, says expanding with additional hydroponic systems has been a painless process because of how user-friendly they are. Craig said, “Once we plant and get everything going, we can pretty much leave the systems until it comes time to harvest.” The simplicity of the hydroponic systems has also been extremely beneficial to the students. “Because we’re working with special needs adults, it’s all about repetitious work. Then when the students age out of the program at 26, they can find jobs at stores, urban farms and other businesses,” he continued.

The Drew Horticulture Program distributes a portion of their produce to local food pantries for those in need. The program also donates food to a “Clinic to Farm to Patient” initiative through Buckets of Rain that prescribes fresh produce, rather than medication, for diet-related ailments, helping them continue vegetable distribution throughout the winter. The Drew Horticulture Program also makes biweekly deliveries to Chartreuse Kitchen and Cocktails Farm to Table and sells produce at the Detroit Eastern Market. Profits from these sales are then invested back into the school’s programs to help further the students’ educations. 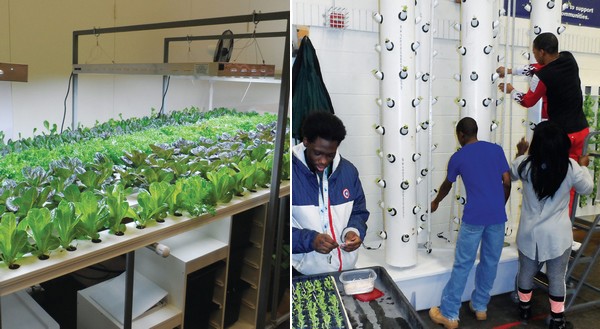 Since purchasing the additional GrowSpan HydroCycle Systems and Low Pro Tunnels, Craig has worked alongside the students towards a consistent schedule of planting and harvesting, so they remain busy and constantly learning, even in the colder months when others must stop growing. This consistent production schedule has allowed the school’s produce to reach even farther into the Detroit community and help those in need, something Craig emphasizes to his students regularly. “It’s important for the students to understand there’s a greater good to what we do. We help people at the source, combating childhood obesity through our school lunch program and now reaching them in their homes too,” he said.

This steady growth has not gone unnoticed as the Charles Drew Transition Center is now a nationally recognized institution after receiving the Michigan Department of Education’s Innovative Educator Corp Award and the 2017 National School Board’s Magna Award. Looking towards the future, it seems there are no limits for where the Drew Horticulture Program will go. A fruit orchard of 22 trees has already been planted, and Craig says he looks forward to continuing his work with GrowSpan to find new and innovative growing solutions.

Even as the Drew Horticulture Program further grows and evolves, the students will always remain at the heart of the program. “We want them to remain engaged in the Detroit community, staying active and ultimately finding employment,” said Craig. He also noted that the relationship between The Charles Drew Transition Center and GrowSpan has been vital in helping the program achieve this goal. “We couldn’t have done it without our relationship with GrowSpan. We continue to work with Heather who has been fantastic, and the education they have provided continues helping us move forward.”