“Data is everything, especially when looking to make every graft count”

Keeping grafted seedlings healthy can be a challenge for any grower. This is also the case for Costa Group, who are currently building the largest nursery in Australia. Yesterday Jack Mooney, of Costa Group Australia, spoke at the Grodan International Propagation Seminar about how they keep grafted seedlings healthy in their facilities. Jack: “Data is everything, especially when looking to make every graft count.”

Success rate
When Jack first joined Costa Group in Australia, the company was plagued with grafting difficulties. “We were only grafting about 40,000 plants per year and we had success anywhere from 30% up to 80%,” he says. “It was very difficult for the company to get confidence in the ability of the nursery to propagate. This is our graft success since 2017: we aim for a benchmark of 98% each time – but we’re hitting 99-99.5%.”

So how did Jack and Costa Group manage to turn this situation around? By researching the effects of a lot of different factors on the success of graft healing. “For the right healing conditions you need: optimal temperature, humidity, the right lighting, the right time, and – of course – you need good people.”

Grafting is an important activity for the Australian company. Costa Group is Australia’s largest horticultural company, they have multiple produce segments across mushrooms, citrus, avocados, blueberries, and they also have markets and logistics departments. In addition to that they have 30 hectares of glasshouse tomato and are currently on the way to build another 10 hectares. “With this we have an on-site nursery as well, which is an ebb and flow nursery,” says Jack. “We’re also using healing chamber technology, so we have four independently controlled healing chambers that use LED lights."  With these they are also building a new nursery which will be 2.5 hectares in size and will be the largest nursery in Australia. 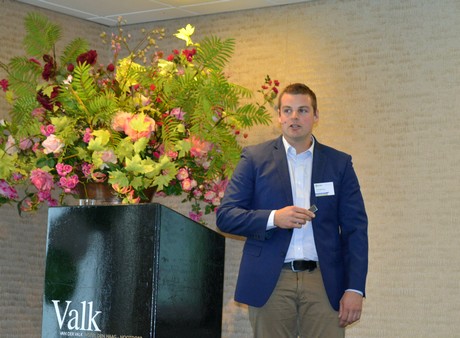 Jack Mooney presenting at the event

Lighting
Lighting is always an important topic to discuss when it comes to propagation. “We tested a range of different lighting spectra, and at the end of the day after testing all the spectra, all lighting we tested had similar success, but the effects on the plant were different,” Jack says. “If we look at the quality of the grafts we can see we’re getting a stretched plant with only red light, and a very short stunted plant with blue. What we saw with development of light spectra for healing of grafted plants is you need to have lighting in the red and blue – the key absorption peaks of the plant."

According to Jack the composition of the light also matters in relation to the quality of the plant. “We did another trial looking at key commercial lights, some with more blue and some with less blue,” he says. “What we see is that the introduction of a little bit more blue light in the healing chambers results in a more compact sealing. Compactness is an indicator of quality for me as a propagator – to get an index for compactness the plant height is divided by the dry weight of the plant.”

Intensity
The next step in lighting is looking at light intensity; to do this in the healing chambers they changed the levels of the shelves and set the lights at different set points. “What we see is that under low light intensity – somewhere around 15 micro-moles – we’re getting reduced success, so low light is actually detrimental to the grafting healing,” Jack says. “Of course we get good success above 50 micro-moles, but really the best bid is at the 150-175 micro-moles – here we’re getting optimal graft healing.”

Onset and duration
Perhaps the most important aspects of lighting are the onset and duration of the lighting period. “For this experiment we had four treatments: no darkness, 24, 48, and 72 hours darkness,” Jack says. “What we found is that early onset of light in the grafting period results in a much better performance on grafted tomatoes. Increasing dark periods results in decreasing graft success. However, we must be careful not to overdo it. You can always push the boundaries too much. If you have too much light and you don’t have a good day/night period then you can get cell burst. While it’s not detrimental to the plant overall, we still don’t want to be aiming for a subpar sealing.”

Other crops
So for tomatoes it is best to start immediately with lighting the grafts, but according to Jack’s research it’s different with other crops. “When we’re looking at the grafting of watermelons onto inter-specific squash we find a different result,” he says. “With this we see that 48 hours in the darkness is better for these types of products. In grafted cucumbers we’re also seeing a similar instance, where the 48 hour dark period is resulting in optimal grafting success.” 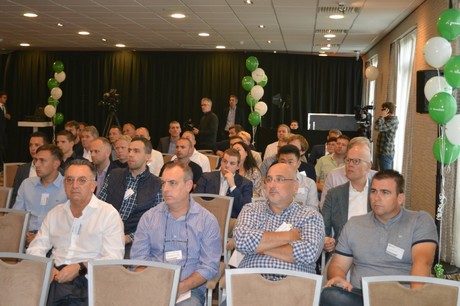 The audience was very interested in what Jack had to say

Environment
The environment is another important aspect for grafting success, temperature being one of the more important elements. “In the healing chambers we had we were able to set temperatures for each room independently, correct to one degree,” Jack says. “So in this experiment we looked at 16 ℃ treatment, 22 ℃ treatment, 28 ℃ and 34 ℃ treatment. We can see that 34 ℃ is absolutely detrimental to the graft healing. So this is important when you are in areas where you don’t have much control over your climate, you have to make sure to keep temperatures within that 22 ℃ to 28 ℃ range. You can heal seedlings at 16 ℃ but it does take a lot longer.”

Humidity
Jack tracked the relative humidity of the healing chamber via the computer and was able to see the impact of varying humidity percentages on the healing process. In the numbers they were able to see a linear increase in graft success for the first 72 hours after grafting. It also shows that 70% humidity in those first critical days of the process is really detrimental to graft success.

People
Perhaps the most important element of successful grafting are the people. At Costa Group there was an instance in September last year where they didn’t hit their benchmark 98% success – they were at 96.9%. “That’s not good enough, but we can have a look at why that actually occurred,” Jack says. “It didn’t have anything to do with the environment, it didn’t have anything to do with lighting, it all came down to people. I think operators are sometimes forgotten about, and more emphasis needs to be on having critical people in your team. We need a good selection of operators, good training for our people, we need to make sure that the task is supervised, and when we identify good people we need to work on strategies on how to retain them in our business.”