“We have been growing herbs since the 1980s”

Through a combination of open field and greenhouse growing, Israel is able to produce and export herbs year-round. Arava Export Growers, an Israeli based company with branches in the Netherlands and in New York, exports a wide range of products from root products to citrus, fruits, vegetables to herbs. While the company now grows and exports a large variety of products, they started out in the 1980s growing herbs and peppers.

Ido Yaari, the company’s head of business units, says: “We work with a group of growers in Israel but we also get some of our herbs from Kenya and Tanzania. We have over 40 different types of herbs, all fresh cut, but our main variety is basil, of which we also produce a good quantity organically. We have been noticing that Thai basil, which has a different scent and flavor than regular basil, has been growing in popularity recently.” 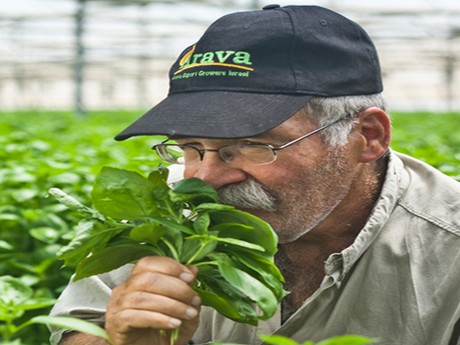 The company also sells more than 20 varieties of edible flowers: “We sell mostly to Europe, but we also export to the Far East and Canada. We sell our edible flowers to the same markets and often even the same customers as our herbs, but for the edible flowers we haven’t been seeing much movement – the market has remained steady without any major ups or downs for us,” says Ido.

The herbs are all fresh cut and packaged in environmentally friendly packaging. Ido explains: “The herbs are sold in bulk in 1 kilo cartons, but our company has the ability to pack them however the customer wants. We have been seeing that the customers are more interested in packaging that uses as little plastic as possible. This is something we see mainly for our organic products: the customers who purchase these are more likely to also want more eco-friendly packaging options.”

Though the company has been selling herbs for decades, today their main product is bell peppers: “We export about 30% of all the peppers in Israel and the rest of the peppers are exported by tens of other companies. This means that we are at least twice as big as the next biggest producer.” Arava produces conventional and organic bell peppers of the green, red, yellow, and orange varieties. The harvest of the conventional peppers is set to start in mid-October, and the organic varieties will be harvested in November.

Ido says that this season’s crop looks promising: “We expect to harvest about 25,000 tons, which is a little bit more than last year’s volumes. Our biggest market for peppers is Russia, because they don’t buy from Spain. We also sell directly to some retailers in the U.K. and in Eastern Europe. Spain is our biggest competitor, but Israel has a better logistical connection to Eastern Europe, so we win out over Spain there. For the U.K., we export there because they want to ensure that they have a diverse supply and don’t have to depend on just one area of producers,” he concludes.