Yesterday, there was a celebration going on at Syngenta in the Dutch Enkhuizen due to the opening of the company’s new innovation center. The opening of the 40 million euro costing center drew in a lot of interested parties. The power of the breeding sector and that of horticulture shine through in the articles.

"An arms race with diseases, plagues, and the climate; the whole world benefits from the new seed innovation center Syngenta in Enkhuizen”, was the headline in het Noordhollands Dagblad. "Millions impulse seed industry Enkhuizen: 'The vegetable technology capital of the world", says NH Nieuws. Even the Dutch broadcasting network NOS mentioned the opening. “Seed breeding for vegetables is booming: a kilo of tomato seeds more expensive than a kilo of gold”, as it was written on the news website. 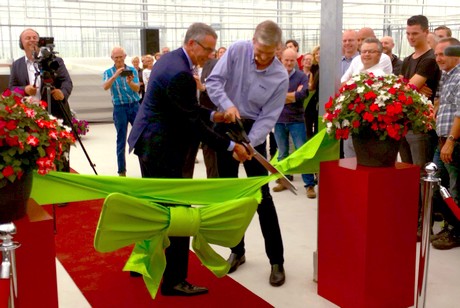 Speeding up the breeding process
What they have made is very impressive. The seed technology center and the backcross factory in Enkhuizen make it possible to speed up the breeding process significantly, Arend Schot said last week. “When I graduated from agricultural school, it took 15 years to bring a variety to market. Now, with the backcross factory, the process only takes ten years. Crossing in the genes in the older lineage is being sped up to only take half as long. What would normally take six years has been brought back in by the backcross factory to only three. This, combined with the seed technology center, makes it so you can cross a lot of new qualities into a plant in a short period of time.”

The opening trade was led by CEO Erik Fyrwald and Secretary-General of the Ministry of Agriculture, Nature, and Fisheries (ANF), Jan-Kees Goet. “The seed innovation center in Enkhuizen strengthens the position of the region. A good example of being ahead of the curve in terms of innovations in, for instance, climate resilience”, says Jan-Kees Goet.

An impression of the backcross center of VB Group. Who realized the R&D greenhouse.