Just over two years ago, Hurricane Harvey hit Houston and its surrounding areas, causing catastrophic flooding. Towards the end of last week, the area east of Houston was hit again, this time by tropical storm Imelda. “These types of storms can only happen in June, September or October in our area,” says Brent Erenwert with Brother’s Produce. “A cold front came down, the storm came through the Gulf and got trapped between high and low pressures. These create ‘perfect’ storms that move slow and produce lots of rain.”

Fifth-wettest day ever
The highest rainfall report came in from around the Beaumont-Port Arthur areas. Near Hamshire, which is about 65 miles east of Houston, 43.39 inches of rain were reported. Several other areas topped the 40-inch mark. As a result of Imelda, this past Thursday was the fifth-wettest day ever recorded in the Houston area.

The flooding caused four Brother’s Produce trucks to get stranded. “Two of our drivers had to find a shelter to spend the night,” Erenwert mentioned. As the drivers were making deliveries, the water just kept rising and rising. It is common for the water level to continue to rise the first day or two days after a storm. It rises incredibly fast, about 1 to 2 feet per hour and it takes three to four days for the water to completely drain. 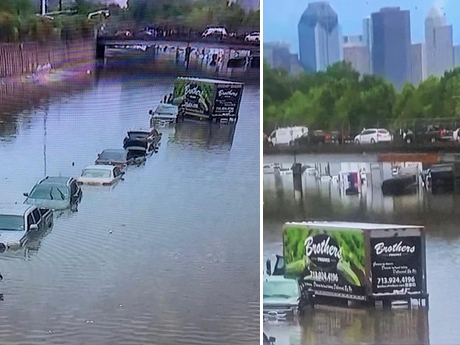 Underappreciated industry
This picture shows the danger truck drivers put themselves in. “They drive in winter storms, through rain and hail to get produce delivered on time,” said Erenwert. “In general, logistics people around the world are underappreciated, but every product we use was touched by a truck at some point in its supply chain.”