"Diffuse coating provides for better light distribution within the crop"

Two years ago, when owner Frank van Lipzig was in need of a new crop manager, he expressly chose someone without experience with cucumbers. The reason for this was that he wanted someone able to take a new, fresh look at the crop, without the baggage of ingrained habits.

The new person – Peter van Ninhuys, former rose grower – first defined a New Cultivation Approach in consultation with Lipzig. Next, they dealt with the light incidence and the crop’s use of light, plus the use of coatings to improve on this.

Van Lipzig Tuinderijen grows 8.5 ha of cucumbers in the village of Horst in the Province of Limburg in the Netherlands. The company aims for optimal sustainability. Improving the crop’s result is consistent with this aim: the more high-quality cucumbers you can produce with the same quantity of energy, the more sustainable the result. 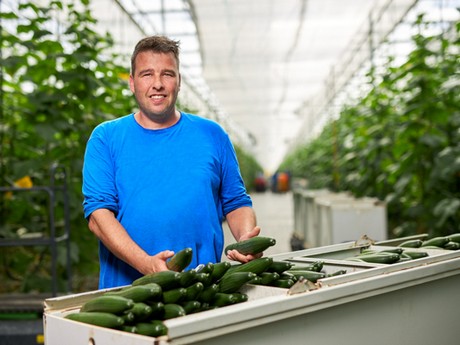 Blocking heat emissions
“When I started here, we first focused on the New Cultivation Approach. The most important part of this is that we reduce heat emissions. This prevents the head of the plant from cooling too much. Since we started doing this, we barely have had any problems with the Mycosphaerella blight, while this was quite the challenge for us before this,” says Ninhuys. This means that we barely have to throw out any diseased cucumbers anymore.

He has acquired a net radiometer that measures the difference between radiation and heat emission. When the net radiation is 20 to 25 watts/m2, the energy screen closes. In other words, we do not wait until the heat emission gains the upper hand, because then you are already too late: at that point, the head is already cooling off.

“We then pull the shade curtain 80% closed. There is then no difference in absolute moisture below and above the shading, so that the exchange of air is very calm,” he says. “The heads stay warm and the transport of water towards the heads continues normally, and therefore the supply of calcium as well. That provides for strong cell walls that are not attacked by Mycosphaerella.”

The new approach did not result in a higher 24-hour temperature.

Improved light incidence
The next step consisted of a critical evaluation of the glass and light transmission. “This quickly led us to ReduFuse. You want to get the most out of your greenhouse and a diffuse coating provides for better light distribution within the crop. In the event of extreme radiation, this allows you to close the shade curtain somewhat later. In the past, the shade cloth was closed at 700 watts. Now, this is 800 watts. This means that the crop receives more light and that translates into increased photosynthesis,” he notes.

He is unable to quantify ReduFuse’s contribution to the increased production. Every year is different and furthermore, the cucumber crop is plagued by virus problems. The current year is the first year entirely without any viruses. “This alone already pushes production to a higher level. What the coating contributes becomes impossible to say,” says the crop manager.

Different ways of ventilating and heating
The use of the coating has led to a different way of ventilating. In the past, when the sun was on the sheltered side of the greenhouse, he would fully open the ventilation windows on that side. But an open window allows the sun in unfiltered. “The plants would then start to wilt on that side. This made the effect of ReduFuse visible. This is why, in similar situations, we now keep these windows not as far open on the sheltered side, while we open them up much further on the wind side,” he says.

Another change is that he needs to provide somewhat more heat in the morning to activate the crop. “After a year of experience with ReduFuse, we decided to make this our new standard. It improves the light distribution and brings more light into the greenhouse, with increased photosynthesis as a result. The crop is subjected to less stress and stays much stronger. This is very noticeable in the crop’s heads. Another major advantage of the temporary coating is that you remove it in August and you simply have glass again. Then you once again capture all of the light.”

AntiReflect
To further increase light levels, the grower in October 2018 had AntiReflect applied. The entire area was coated all at once. “We were interested in AntiReflect, because the additional light can increase production. That is particularly attractive in the spring and in the autumn. A special aspect is that you cannot see the coating on the glass. But a measurement conducted by LightLab in Wageningen showed that the light levels indeed improve. Another striking observation is that, since the coating was applied, the greenhouse heats up very fast on the sunny side. So clearly more radiation is entering the greenhouse. This reduces the need for heating, while on the other hand, you need to pay attention to sunburn in the early spring and provide more shading. We are assuming that the light gain due to AntiReflect will persist for a few years,” he says.