Asia Fruit Logistica 2019 wraps up: “Stand holders have been happy with the results”

The third and final day of Asia Fruit Logistica 2019 has passed, and overall, the stand holders have been happy with the results. The traffic was noticeably lower than it has been in previous years, but it was much better than expected. At the same time, some of the stand holders feel that closing the exhibition 2 hours early was a waste of the day, and they would have rather had the full day.

The Turks feel the exhibition has been a success: their figs are really picking up and the pomegranate season is about to start. The Egyptians were also very pleased with the exhibition. There is a huge demand for their citrus from China, Hong Kong and Asia in general. This means they are mostly competing with each other.

Spanish table grape growers who grow on an area of 100 hectares say that they are very optimistic about selling in China. The Chinese market shows a preference for grapes that are intensely black and very sweet. Next week they will also begin selling in Vietnam. The average cost for transport accounts for 0.25 euros per kilogram, meaning that it is more expensive to transport to Europe with TIRs than to Asia by sea. 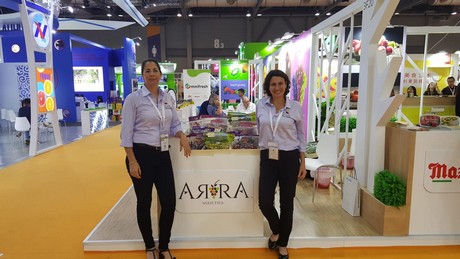 The number of visitors on day three has decreased quite a bit. Similarly, a couple of stand holders did not show up for the third day, or otherwise left very early on in the day. Many Chinese companies with small booths left early saying that this was because today was not very interesting for them.

Still, the Chinese are quite positive about the show. They are saying that the number of visitors is down but that the people that did come are more willing to place orders. Amy Zhang from Jining Fuyan Fruits & Vegetables Co.,Ltd., who has attended the show multiple times before, also mentioned that while there were less visitors, the visitors that did attend were very interested in her products. Vietnamese companies have received many visitors in the past two days.

As is well known, food packaging is very important in China and this year the presented fruit packaging looks even more beautiful and detailed then it did in other years. Examples include New Frutti’s Disney packaging and Lurra’s special Korean grape packaging. 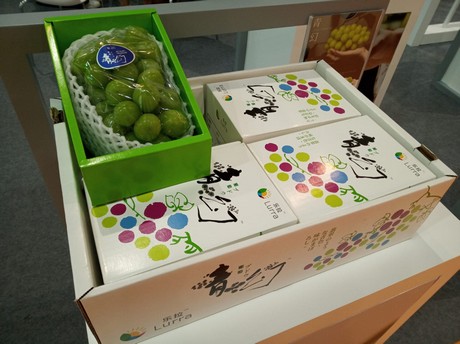 India is a very good market for Australian apples, pears and kiwis due to the high tariffs India has imposed on U.S. fruit. Thirty buyers have been brought in from India by the Australian trade and investment department there.

A German exhibitor said that he sells Gala and Red Delicious apples as well as apple juice in China. He said that the Chinese clients want very sweet apple juice. He also sells in Taiwan, India, and Singapore. The exhibitor is a little disappointed because he has seen fewer visitors than he did in past years.

One Italian apple-selling exhibitor said he is very satisfied with the contacts he was able to make this year; the fair was very positive for him. This Friday there were very few visitors but he had already met many buyers in the first two days.

One Costa Rican exhibitor shared that he connected with many promising potential buyers from Japan, China, South Korea. The Costa Rican company will begin shipping 60 containers of bananas per week to a Chinese company. In past years more and more northeastern countries know about the quality of Costa Rican bananas and pineapples. They are glad to be able to attend the show, and found that the quality of the visitors was very good.

Just like in previous years, many companies revealed new innovations this year. Reemoon, a sorting line specialist, introduced their new internal and external scanning machine. Shenyang Renhedatong showed their new potato variety this year. It is called the Elizabeth variety, and is white on the inside but much sweeter than the orange or purple variants. They said: "This is the first year we participated, but we received a lot of positive feedback on our sweet potatoes. We brought some with us to let the visitors try them."