“As we say in Holland, measuring is knowing,” says 2Grow co-founder Olivier Begerem with a knowing smile. “In horticulture, there are still too many things being done based on assumptions, still too many mistakes being made. In our opinion, it’s time to stop assuming and start measuring.”

Indeed, measuring is what 2Grow is all about. Born out of experiments at Gent University in Belgium, their underlying idea is common to most Ag 4.0 enterprises: a will to move beyond old-school trial and error, manual measurements and assumptions, towards ultra-efficiency, sensors and big data.

For a grower, understanding the different stages of a plant’s development is crucial, and these new real-time measurements offer a kaleidoscope of new insights. It’s like a modern sports coach suddenly gaining access to an elite athlete’s real-time biometric data, enabling an ultra-customized development program.

This is what 2Grow offer – “real-time feedback of the plant itself using an objective and continuous measuring tool.” This technology gives valuable insights on how the plant really feels and reacts towards all actions in the greenhouse. They’ve grown quickly and now work with more than 100 growers around the Netherlands, including world leaders such as Delphy.

With Aqua4D sharing similar values in horticultural efficiency – in particular in optimizing irrigation, 2Grow were keen to have the chance to measure the effects of this innovative water treatment in real time.

Method
2Grow technology uses two types of sensors, one for measuring sap flow and one for measuring stem diameters. “Every action has an influence on the plant which normally cannot be measured at the exact moment it occurs,” says 2Grow’s Maxime Dedecker. “With these sensors, it is possible to accurately track the plant’s reactions to environmental changes (irrigation, temperature, etc.) or actions such as pruning or harvesting.”

By seeing exactly how a plant reacts to every action in the greenhouse, growth can be optimized and the grower can react appropriately and as quickly as possible depending on the real needs of the plant.

In the case of irrigation, this means ensuring the soil or substrate stays in optimally moist conditions, something which can have huge knock-on effects. Previous studies involving Aqua4D’s cutting-edge technology has shown irrigating using this system can lead to higher yields, water savings, and better plant growth. Would these real-time measurements replicate these longitudinal results?

The 2Grow / Aqua4D study was overseen by 2Grow’s Olivier Begerem and Maxime Dedecker, and Aqua4D expert Raymond Lescrauwaet. The experiment was set up on two identical adjacent plots – one with plants treated by Aqua4D, and one control: 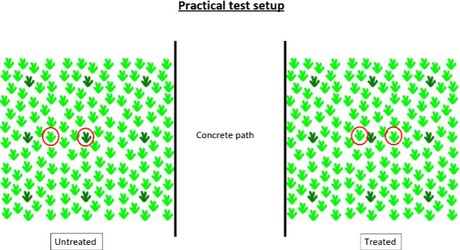 Results
Using stem diameter and sap flow measurements, for four months the experiment compiled day-by-day and minute-by-minute data on how the plant was responding to being irrigated with Aqua4D treated water. “Using our tool we could really see the effects of the Aqua4D system as soon as we started measuring,” says Begerem. “Now after 4 months of measuring we keep on seeing the same effects.”

2Grow split up the Aqua4D results into three segments:

When the line goes under 0 it means that there is shrinkage, this is caused by a too generative/stressful way of growing.

“The last option can be good for production in the short term (the plant puts its energy into reproduction/fruits), but will cause a weakening of the plant and will actually cost production in long term,” Begerem explains. 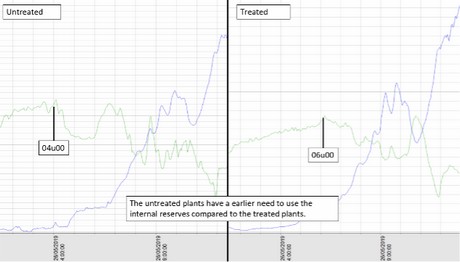 We can see that the plants irrigated by Aqua4D need to take up less of their reserves for their daily transpiration and activities. This means that either they have a better root system or they are able to absorb water more easily – two things which the Aqua-4D system has been proven to promote. In the plants treated by Aqua4D, we can conclude that the plant has more reserves/energy in excess which can go towards the fruits instead of the green areas such as leaves or stem. “It’s only logical that this energy surplus is going towards the fruits instead of growth and as such this results in higher yields,” says Begerem.

Finding #2. Less daily stem diameter variation in plants treated by Aqua4D
The variation referred to here is the difference between the thickest/thinnest point in the stem’s diameter. The higher the variation, the more stress a plant has as it needs to work harder and take more internal reserves to support its activities. 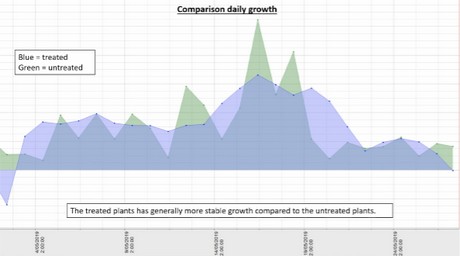 Here we can see that the treated plants (blue) have less variation, so they don’t need to work as hard during the day compared to the untreated plants (green). This correlates with findings showing that irrigation with Aqua4D results in less stress in the plants, and better plant behavior in general.

Finding #3. Earlier restoration of internal reserves
The daily performance averages show that the untreated plant actually has a rather negative performance on the whole, whereas the treated plant can really fill up its reserves and see more growth during the day. The graph on the right is a more vegetative way of growing, while the one on the left is a more typically generative way of growing. 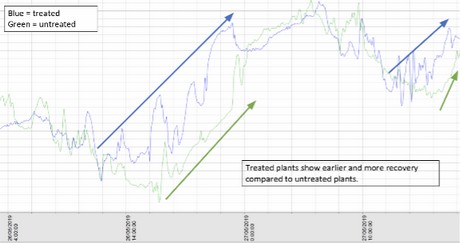 “The time of day is important to note here, explains Begerem. “The treated plants can recover from the evening (by midday) much more quickly than the untreated plants (by ~16:00).” The same goes for the end of the day – the untreated plants shrink further towards the end of the day but the Aqua4D treated plant is still filling up its cells. This is important as there is more vegetative growth and a lot more capacity for stress. Again, this is in line with previous findings which show that plants experience a more stable growth when irrigated by the Aqua4D system.

Conclusions
2Grow have been measuring various Aqua4D installations in France and the Netherlands, with similar results observed each time. This also backs up the findings of previous academic studies around the world (a compendium of which is available here). Meanwhile, sap flow studies in Californian orchards which observe the same behaviour – results will be published in late 2019.

Based on all the collected measurements, 2Grow concluded that plants treated with Aqua4D:

Hilversum-based expert Raymond Lescrauwaet has been working with the Aqua4D system for many years: “It has become clear to me that this innovative technology can be of great added value for top growers of plants and vegetables.” He adds that the Agriculture 4.0 potential of combining these technologies is huge: “By monitoring the cultivation with 2Grow plant sensors, the growers can maximize the benefits of Aqua4D for quality and yield. Aqua4D is the difference between good and bad quality tires for a car where 2Grow offers an extensive dashboard to monitor all parameters.”

2Grow’s Olivier Begerem is equally optimistic about the findings, and about how far new agricultural technologies can go: “Without measuring we do not actually know how the plant truly reacts towards all external conditions - this is what we want to change with real- time feedback. Tools like these will only become more important in the future, especially when we think of autonomous greenhouses.”

Aqua4D & 2Grow, in partnership with Delphy Agriconsult, will be presenting these results and more at a series of seminars in the Netherlands in September. See here for more info: http://www.lescrauwaet.com/Programma-info/