Last year the share of vegetables grown domestically in the United Kingdom was lower than ever. Only just more than half (53%) of the domestic consumption was grown within the borders of the country. The 53% of 2018 was influenced by the small production due to the drought. The decreasing trend has been ongoing for a while. It was rapid until a decade or so ago. In 1993 it was still 97%, according to Jan Keen Boon of Fruit&Vegetable Facts.

Share of own production in fruit rises slightly
The share of domestically grown fruit has risen slightly in recent years in the United Kingdom and reached 17% in 2018. Around 1990 it was still over 20% to then drop to less than 10% shortly after the millennium. 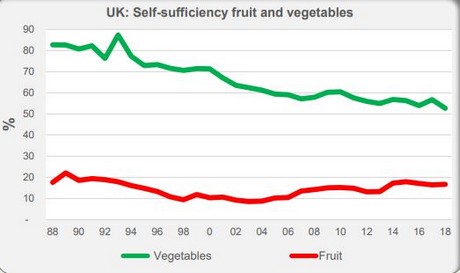 Spain 19% and the Netherlands 12%
The import of fresh vegetables grew considerably from year to year until 2005. After this it levelled. In 2016 the peak was reached with an import of 2,37 million tonnes. The last two years there has been a decline but it is still almost the same size as the domestic production.
Spain is the main foreign supplier for the United Kingdom. Last year slightly less than 20% of all vegetables in the United Kingdom were from Spain. The Netherlands was second with a share of 12%, of which 9% Dutch product and 3% re-export via the Netherlands. 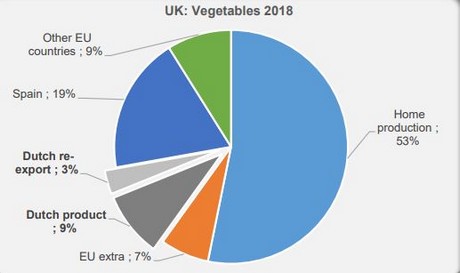