Hurricane Dorian strengthened into a Category 5 system and blasted the Bahamas Monday as it approached Florida. Winds in excess of 165 mph cut power, overturned cars, and downed trees, with reports of severe damage to many of the buildings on the island of Grand Bahama. Tragically, at least one person - an 8-year-old boy - has died.

The next land mass in Dorian's sights is the United States. Before the weekend, the forecast was for Dorian to cross the Florida coast on Labor Day, but the storm has subsequently slowed and now appears to be taking a path brushing the coast from around Palm Beach, Florida, up to North Carolina. It has also slightly weakened to a Category 4 hurricane, but is still considered extremely dangerous.

Wind and rain for Florida
Although the Hurricane may not cross the coast, there is expected to be significant wind along with heavy rainfall for coastal areas. General estimates suggest 10 inches of rain and more are possible for some parts over the coming days. As a result, local authorities have issued evacuations for many coastal areas in Florida, Georgia and South Carolina. Additionally, Port Canaveral, Fort Lauderdale/Hollywood International Airport, as well as Orlando International Airport are all now closed. Miami International Airport will remain open as it is no longer in the Hurricane's path. 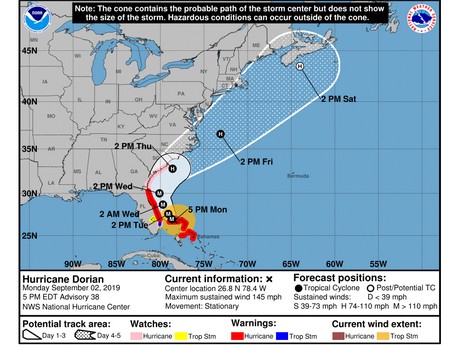 "We are all battened down and waiting to see how close the storm will come to the coast," said Doug Feek of DLF International - a citrus grower based in Fort Pierce. "This will determine the wind speeds and the damage." He said that the next few days will be critical.

At this stage, Florida growers from the area of West Palm Beach northwards will be the first to see the heaviest impacts in the US. This will include growers of tomatoes, citrus, and corn and other fall vegetable products.

Corn planting postponed
Even before Dorian has a direct impact on Florida, growers are already feeling the effects. Mike Owens of Pioneer Growers, said that although there has been little felt in the region as yet, the company has taken precautions and chosen to delay the planting of their fall corn crop until after the storm has passed. It means there will be a delay to harvesting later in the season.

"There has been no real impact in South Florida yet, just a little rain," he shared. "However, our first plantings for fall corn have been delayed a few days due to the possibility of the hurricane coming through the area. If we get a lot of rain it might delay planting a little longer, as the fields may be too wet. We normally aim to start harvest around mid-November. However, most likely harvest will start late November now. We will just have to wait and see what happens from here."

Florida is expected to begin experiencing strong winds and heavy rain from Hurricane Dorian starting this morning. It will continue to impact Florida today and tomorrow before moving alongside Georgia and South Carolina.