The effects of full-LED system combination on pepper

Whereas LEDS are used all over the world to better the growth of tomatoes, lettuce, berries and many other crops, it isn't being used on pepper often. Costs are too high and ideal circumstances haven't been found. Turkish developers now share their insights on the possibilities of opening up this crop for LED lighting as well.

To increase production of pepper in a certain area in Turkey, the effect of LEDs with different wavelengths, namely red, blue and cyan was examined in a lab-scale greenhouse setup.

All necessary control and measurement of this lab scale greenhouse was carried out with written algorithms in Lab-VIEW.

Set-up
The second and third floor were lighted with 18 hours a day throughout the 55 days, with the same photosynthetic photon flux density (PPFD) of 360 μmol m-2s-1. 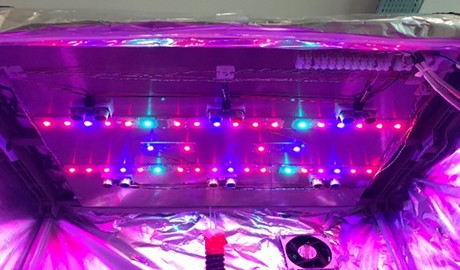 To specify the effect of exact light ranges, specific LEDs were chosen. The necessary light wavelength for photosynthesis is the 400-700 nm band and the most effective values are 660 (red) and 440 (blue) nm, since chlorophyll-a and b works in this range. Besides this, cyan light (500 nm) also affects the plant growth since carotenoids have high absorptance for this range wavelength. 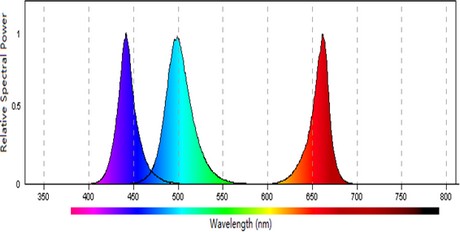 Red, blue and cyan wavelengths which were used in the experiment were measured with an Ocean HR4000 spectrometer.

Marketable fruit weight for red-blue-cyan was 191% greater than the red-blue lighting at the end of 55 days. Red-blue effect compared to sunlight was 7% more.

Economic analysis
18 hours LED consumption was approximately 0.074 kWh. The electricity price in Turkey is 0.123 $/kWh. Daily cost of electricity would indicate 0.0091 $. Consider that the average price of pepper per kilogram in Ankara, Turkey is 1.4 $ (as per date ref).

The experiment lasted for 55 days, so 0.50 $ was added to the cost of pepper/kilogram to compensate for lighting.

Considering raising the marketable fruit weight (%) in the red-light-cyan combination is evaluated as highly profitable in spite of the additional energy cost (%).

Read more at Journal of Effect of Supplementary Cyan Light to Deep Red and Royal Blue Range Wavelengths on the Seedling Period of Iceberg Lettuces https://www.iiste.org/Journals/index.php/JBAH/article/view/47891