"Nice, creative destination of leftover plot after restructuring that fits the Westland DNA"

In the Westland, every square meter is fought for. People want to live, entrepreneurs want to expand. Growers who want to build a greenhouse, often have to wait a long time before they have sufficient land. Agnes and Ben van den Berg also had to have a lot of patience with their greenhouse on a piece of leftover land from the restructuring Westland is working on. After some deliberation, the municipality gave the green light for opening a vegetable garden under glass, and so it was alderman Karin Zwinkels, Westland, to open 'Eigen Spijs' yesterday afternoon. "A beautiful initiative to counter loneliness among the elderly, and growing organic vegetables together fits the Westland DNA." 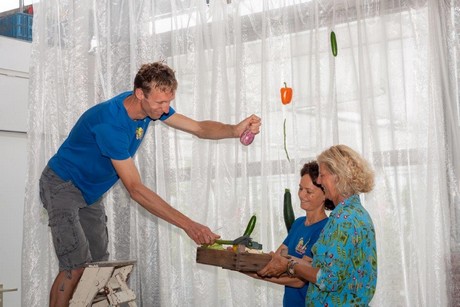 The opening action: the harvesting of the hanging decoration fruit as symbols for the fruits which the land will produce. Alderman Zwinkels then opened the curtain. 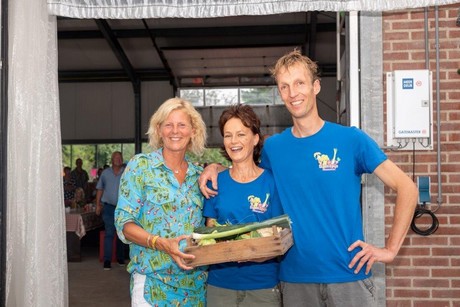 Agnes and Ben took the initiative to go to the municipality to give a new destination to the old gerbera greenhouse of five hundred square meter. Restructuring had already taken place in De Lier, and a greenhouse in a corner between two ways was left. It was not possible to make one large plot. Important, because it is something a lot of attention is paid to in a municipality where every meter can be sold four times. "Every square meter which is lost will never come back. For this reason, it is important to be very critical when allocating a different destination for greenhouse horticulture land. If there only had been a minimal chance of further restructuring in the future, the whole thing was called off. If you give the green light, you lock things down completely." 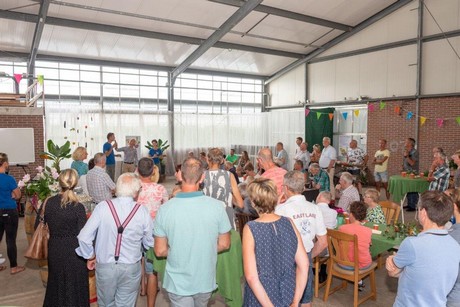 A great turn-out of around hundred people for the opening, including all interested parties in a vegetable garden plot as well as entrepreneurs with plans to start a similar initiative.

One of the conditions to give the green light was that the initiative did not have a commercial objective. The municipality would not have given permission for a caravan stand. "We are open to similar initiatives. But water and green can also be a destination of a leftover plot. As municipality, we can only facilitate in this, the entrepreneurs must come with the plans themselves. Still, it is not the case that we will greenlight all future initiatives. If plots can be merged, as successfully happened with two companies in Monster and Poeldijk, we will not give permission for a vegetable garden." 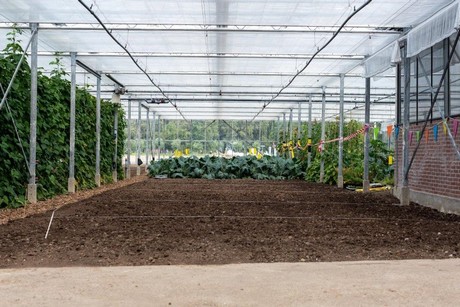 The first vegetables are already in the greenhouse in 2 of the 25 plots which have already been taken into use by the enthusiastic vegetable growers.