The Russian greenhouse industry has seen massive growth recently, with plenty of new projects being realized. With full self-reliance coming ever closer in this market, are there still opportunities to grow? It turns out there are - one of the potential growth markets is indoor cultivation of strawberries. Russian consultancy firm NEO Consult took a closer look at this particular market segment in a new report.

First, some general data regarding the Russian market for year-round strawberry cultivation:

According to the report, there are no greenhouses with supplemental lighting for growing strawberries in Russia, mainly fleecing technologies in the open field and plastic foil greenhouses are used.

In the winter period, only imported strawberries are present in the market. All the projects currently in operation are tunnel greenhouses and plastic film greenhouses without lighting (at the moment there are no projects with lighting for year-round cultivation).

Potential for year-round strawberry cultivation
Access to strawberries is limited throughout the year. In autumn, winter and spring, domestic production is almost nonexistent - strawberries are imported then.

90% of strawberries are consumed from March to July. Also, 99.6% of crops are harvested in this period.

Stable strawberry import
In terms of import, around 50,000 tons of strawberries are imported a year, the majority of which from Belarus.

Import replacement and market growth
Regarding the replacement of import volumes, as well as market growth in berry consumption and access to berries in winter, the report draws the following conclusions: 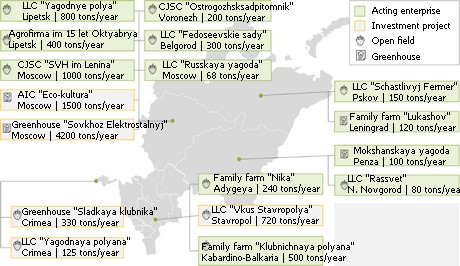 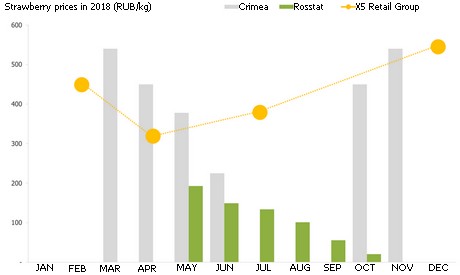 The economics of a strawberry greenhouse
According to the report, the net operational margin of a plastic foil greenhouse project is 35-40%. The production margin for year-round projects involving lighting is higher.