Back in 1989, they began with just one glasshouse of 7.5 acres, and a team of fifteen. Fast-forward thirty years and the business has grown ten-fold to 75 acres of state-of-the-art growing and packing facilities with over 150 employees.

Exclusively peppers
You might be surprised to learn that in the first full season of production, Tangmere produced 1.3 million kilos of tomatoes before sweet bell peppers were introduced on the nursery in 1992. It wasn’t long before Dirk decided to change the core crop of the business from tomatoes to peppers, seeing the unique potential to become a specialist supplier, and the company started to take shape.

The shift in focus to sweet bell peppers was more successful than Dirk and his small team could have ever wished for, and quickly attracted a new customer base. To meet increasing demand and streamline the operation, Tangmere soon built a modern packing facility giving the business the ability to grow, harvest, pack and distribute peppers all under one roof. In 1998, following on from trials and in response to the needs of its customers, the team expanded its range from green and red peppers to include yellow and orange varieties.

Tangmere’s commitment
In 2002, this continued success led to opening a glasshouse in Spain, enabling customers to receive a year-round supply of quality peppers, and increasing Tangmere’s offer. In the 1990’s, they produced 9 million peppers a year and today, production has increased to approximately 68 million peppers annually. 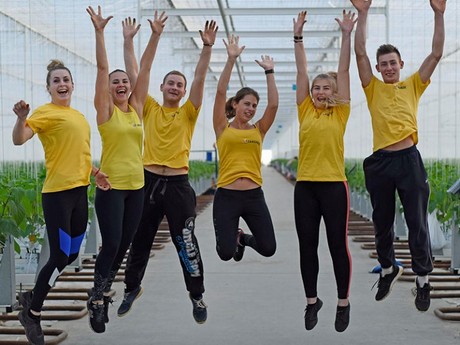 Now, the family business is into its second generation, Directors are sons Dick (Managing Director) and Marcel (Sales & Marketing Director). Tangmere recently held a summer party for employees and their families to say thank you for all their hard work and commitment to the business. Many staff have been at Tangmere for over 10 years and several celebrated milestone anniversaries including Gerard Vonk, General Manager and Simon Whitfield, Glasshouse Operative, both 30 years with the business and part of Dirk’s original team.