Loose tomatoes, beef tomatoes, TOVs, oval, colored, and cherry tomatoes - you hardly see these anywhere in Thai stores - until Dutchmen Thomas Ruiter and Menno Keppel started growing tomatoes. They did this when it became clear that it was difficult to sell horticultural technology in Thailand. These Dutch pioneers in Thailand told their story in the Dutch newspaper, De Telegraaf, recently. 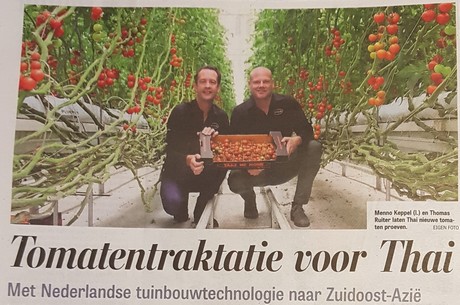 It began with a demo greenhouse. It quickly became apparent that the Dutchmen could deliver larger, better crops than the local farmers. Thomas and Menno introduced seed from a tomato variety new to Thailand. Not long after, greenhouses sprang up all over the village they were cultivating in.

But these Dutch farmers found it tough to get rid of their product. The reason? The tomatoes looked different to the little pale pink, oval tomatoes the Thais are used to.

Supermarkets did, however, show interest. Together with a marketing company (read more about this in an earlier article), the step was taken. The company is known as Dutch Agro Technology and Trade. They moved to Thailand 15 years ago. It is now cultivating 70% on contract. This is done to ensure supply certainty.

In the past five years, the company has moved back to selling horticultural technology. "Thanks in part to the enormous development of the Thai foodstuffs industry, things are going much better," the men say.