Earlier this month, Sakata Seed America hosted its California Field Days. FreshPlaza attended the Warm Crop Trials in Woodland, located about 30 minutes Northwest of Sacramento. This article features the company’s hot pepper variety Arango that just made it to market. 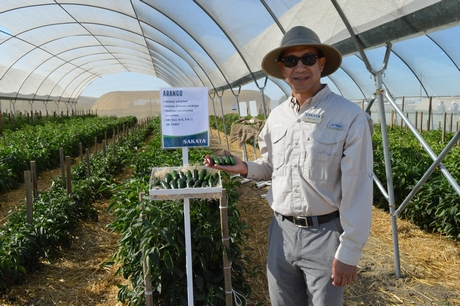 Sriracha sauce
“We’ve trialed this variety for five years,” says Benito Juarez, Hot Pepper Breeder with Sakata Seed. “It’s a hybrid, Jalapeño type of pepper that is mostly used for the processing industry as an ingredient for the popular Sriracha sauce. To get a hot pepper variety approved for processing is a very rigorous process due to the requirements it needs to meet. Therefore, we are happy to announce that this variety, Arango, just got approved by one of the largest hot pepper processors in the world,” Juarez shared.

Processors often go through thousands of hybrids before they accept a variety that has all the characteristics they are looking for. “A variety needs to yield well, which means bearing about 40 fruits per plant,” said Juarez. “In addition, the fruit needs to be big and uniform in size and have the right color.” Out of about 100 trialed varieties by Sakata Seed, Arango and its sister variety 12014, have shown they have all the characteristics processors are looking for. 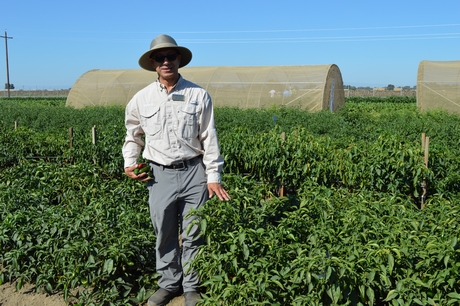 One of the benefits of the Arango variety (left in picture) is that the plants aren't as tall compared to older varieties (right in photo).

Processors work with few varieties
The approval for Arango and variety 12014 just came about three weeks ago. “This is really big for us as processors usually work with a limited number of varieties. Probably no more than five,” Juarez mentioned. Although the processor we are partnering with is not the only pepper processor, the company does take up the largest volume. “There are about six to seven other processors and we expect them to start asking for Arango and 12014 peppers as well now that the varieties have been accepted by the largest processing company.”

Acreage to explode
Arango was trialed extensively in Mexico and California but can also be grown in Honduras and Peru. The variety will mostly be grown in Mexico with smaller volume in California. It is already grown commercially this year, but Juarez expects acreage to explode in 2020. About 80 percent of Arango will be harvested green for Sriracha sauce while the remainder will be harvested once the pepper has turned red. The red peppers will be used as an ingredient for Chipotle sauce, another popular pepper sauce.