With populations growing rapidly, particularly in Asia and the Pacific, farmers and scientists are all the more drawing on the benefits of using irradiation to develop new crop varieties and meet farmers’ needs: higher, stable yields and high-quality plants that can resist disease and climate change.

An initiative led by the IAEA and the Food and Agriculture Organization of the United Nations (FAO) is bringing together experts from across the region to support one another and build on each other’s research, breeding and cultivation results.

“Mutation breeding accounts for almost 2000 recorded crop varieties in the Asia Pacific region,” said Sobhana Sivasankar, Head of the Plant Breeding and Genetics Section of the Joint FAO/IAEA Programme of Nuclear Techniques in Food and Agriculture. “The Plant Mutation Breeding Network aims to build on this success and expand the excellent results already achieved.”

Of the 826 rice varieties released so far using mutagenesis techniques to date, 699 originate from the Asia-Pacific region, including 290 from China alone. The second most widely used wheat variety in China, planted over 3.6 million hectares, was developed using mutation breeding. For more on the contribution of nuclear techniques to China’s agriculture sector, read this article. 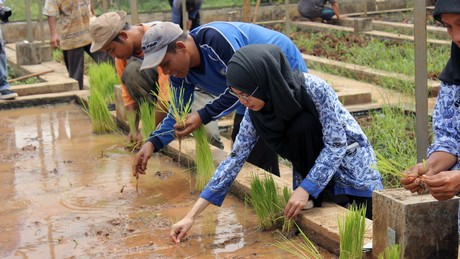 Indonesia is one of the countries participating in the newly formed Plant Mutation Breeding Network, which aims to improve efficiencies in crop mutation breeding across the region. On this photo, scientists in Jakarta are comparing new rice varieties developed through irradiation for desirable traits. (Photo: M. Gaspar/IAEA)

The Plant Mutation Breeding Network, or MBN, aims to improve efficiencies in crop mutation breeding across the region. This goes from accelerating the discovery of better traits in plants, to advancing speed-breeding technologies to get improved traits and facilitating farmers’ access to the improved seeds. “The ultimate goal is to ensure food and nutrition security and improve livelihoods through regional cooperation and knowledge and technology exchange,” Sivasankar said. “And our experts stand ready to facilitate and foster that exchange.”

Genetic and technology exchange
In addition to strengthening their national capacities in plant mutation breeding and associated biotechnologies, participating governments are expected to exchange national germplasms - a seed or anything that, when planted, can grow. This is key, as it could allow farmers in, say Bangladesh, to plant drought-tolerant rice developed by scientists in Vietnam. Bilateral transfers like these would contribute significantly to research and development, as well capacity building, and save efforts by involved countries.

Similarly, through MBN scientists will be able to practice shuttle breeding, which involves growing successive plantings in one year in different locations to make the growing process faster. The MBN is, indeed, intended to facilitate multi-environment field trials in different countries to see where the crops thrive better.

Exchanging new technologies is also on the Network’s list. In order to improve a plant’s trait, scientists irradiate the seed or other parts of the plants using gamma or X-rays. They then plant the seed or cultivate the irradiated material to generate what experts call a mutant population.

And out of thousands of plants in a mutant population, plant breeders need to identify the right combination for their particular climate, soil and prevailing plant diseases. To accelerate this process of selection, scientists have developed new molecular technologies.

“To identify what makes a plant better, nowadays we can literally find the change in the gene and accelerate the breeding of new varieties with desired traits. Instead of eyes, we use a molecular tool,” Sivasankar said. “This tool can not only be used to select new traits but also to disseminate crops with desired traits across regions or continents.”

Such speed breeding technologies, under the network’s framework, are expected to be shared within the region through workshops, scientific visits and fellowships. The network encourages establishing platforms to enable the exchange of the technology and known genes of interest.

Another objective is to support the conservation of samples of improved mutant plant varieties in the Global Seed Vault in Svalbard, Norway. The repository is dug in rock covered in ice that acts as a natural freezer in which seeds from all over the world are kept. The gene bank was built to preserve a wide variety of plant seeds that are duplicate samples, or ‘spare’ copies, against the loss of seeds in other gene banks during large-scale regional or global crises. It is approximately 1,300 kilometres from the North Pole.

Participants of the network are also working on developing a website to provide up-to-date information on national crop and trait priorities, existing varieties, national capacities and infrastructure available, literature on mutation breeding as well as information on training and meeting opportunities.

MBN is currently composed of experts from Bangladesh, China, India, Indonesia, Lao PDR, Malaysia, Mongolia, Myanmar, Pakistan, the Philippines, Sri Lanka, Thailand and Vietnam. Its first meeting took place last month in Beijing, China, where scientists from Africa and Latin America were also invited. The MBN partners are open to expanding the network to meet food and nutrition security and improve livelihoods in other regions too, subject to its success.